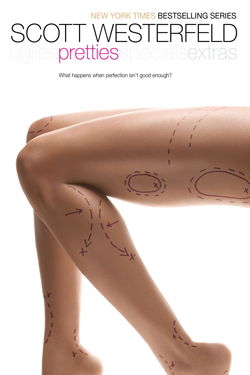 Tally has finally become pretty. Now her looks are beyond perfect, her clothes are awesome, her boyfriend is totally hot, and she's completely popular. It's everything she's ever wanted.

But beneath all the fun—the nonstop parties, the high-tech luxury, the total freedom—is a nagging sense that something's wrong. Something important. Then a message from Tally's ugly past arrives. Reading it, Tally remembers what's wrong with pretty life, and the fun stops cold.

Now she has to choose between fighting to forget what she knows and fighting for her life—because the authorities don't intend to let anyone with this information survive.

Pretties is book #2 in the Uglies trilogy (which is now a quadrilogy due to this). Again, the theme is that pretty on the outside doesn’t guarantee pretty on the inside, and sometimes you have to really fight for what you want—in this case, freedom. It also takes a look at what jealousy, betrayal and power can drive people to do and to become.

Pretty Tally is sort of annoying at first. She and Shay are BFFs because neither one of them can clearly remember their time as runaways at the Smoke. But very soon Tally discovers that when she’s “bubbly” (filled with adrenaline), her thinking clears and her memories return. She and Zane, her new boyfriend, do everything they can to stay bubbly, encouraging the other members of their clique, the Crims, to do the same.

In the first part of the book, Tally’s challenges are overcoming pretty-head (fuzzy thinking), deciding if she wants a pretty life or a bubbly one, and dealing with the fall-out from her and Shay’s returning memories. Then around page 250, the plot takes a huge 90 degree turn off into the middle of nowhere. I’m assuming Westerfeld will pick up and resolve all the loose ends in book 3, so I’m participating in the willing suspension of disbelief until I see how it turns out. I think he can do it. I’m really so hoping so because I loved book #1.

The action is still fast paced. A little slower in places and a little more intense in others when compared to book one. I wasn’t quite as endeared to Zane as I was to David. The pretty dialogue just about drove me nuts, but I think that’s the point.

There is, I think, only one mild swear word (can’t remember which one it was) but I was surprised to see the actual word because everywhere else in the book Westerfeld says, “…she swore.” Maybe they wanted a PG rating.

As in Uglies (book one), there is no direct reference to sex. Tally and Zane are living together and waking up in the same room, but there are no descriptions or even hints of physical intimacy beyond kissing, and there’s not a lot of that.

There is a lot of drinking and drunkenness going on in Pretty Town. These are teens, age 16 and up, so that was a little disturbing. But it’s handled in such a way that it’s clear only fuzzy-headed pretty-heads drink. As soon as Tally gets bubbly, she stops drinking. No one in the New Smoke drinks.

ends with another cliff hanger. Poor Tally, as soon as she gets close to freedom the bad guys get her again. That’s not a spoiler because you know it will happen (there is a book 3, after all) and based on the title of book three, you can probably figure out what she wakes up as. But what I can’t figure out is how Tally will escape her fate in book 3. Nor can I figure out exactly how and why this culture was created and why it continues. The big reveal at the conclusion of the series had better not be lame.

Overall, I liked the book. I don’t mind that I shelled out full price for the paperback. I give it a 3.5, but I reserve the right to upgrade if Westerfeld wraps it up in a believable way.