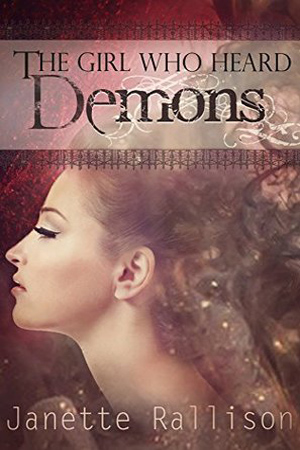 When she overhears supernatural voices celebrating the impending death of the school quarterback, Levi Anderson, she knows she has to do something to prevent it. However, the demons aren’t the ones plotting; they’re just celebrating the chaos, and Adelle must contend with earthly forces as well if she wants to preserve Levi’s life.

Handsome, popular Levi doesn't appreciate Adelle’s self-appointed role of guardian angel. As Adelle battles to keep him safe, she’ll have to protect her heart, too. Can she do both?

A YA Suspense with Paranormal Elements

Based on the title, I was expecting horror; based on the author (I’ve read her before), I was expecting it to be mild. While there are mild horror elements (because, demons), for me, this read more like a suspense story that just happens to have paranormal abilities thrown in.

Yes, Adelle hears demons, and yes, they are slimy and a little freaky. Through the course of the story, she eventually sees and hears angels, as well. But the meat of the story is: Who committed the murders mentioned at the beginning of the book? Why did they do it? What are they going to do when Adelle starts to piece it all together?

Oh, and the romance. That was a huge part of the story too. The chapters alternate between Adelle’s POV and Levi’s POV, so we get to see the blossoming romance (as well as the unfolding mystery) from two perspectives that don’t always match up. I liked that.

There are some religious overtones and explanations, based on Adelle’s personal Christian beliefs. None of it bothered me, because I happen to share many of those beliefs. I also felt it provided insight into her character. Levi is an atheist which provides some balance, however, non-Christian readers may not care for the story.

As always, Rallison’s characters are solid, fully-formed, and believable. She excels at teens. Adelle and Levi are a great couple, even though they are opposites in many ways. Dialog was clever and funny, especially between the two of them. I really liked the double-POV style, that let us get to know both of them.

The suspense part of the story was amazing. The foreshadowing and hints were subtle but recognizable. It was fun weaving all the pieces together in my head, trying to figure it out. The best part: I could only get so far. It took most of the book to get the full picture of the who-done-it.

This is a clean read. There is kissing, but that’s it. There is underage drinking and illegal drug use, but the message is clearly, “Don’t do this.” There is what I presume to be an attempted rape, but it never gets far enough to really be sure what the guy’s intentions are. As for other violence, there are murders mentioned, an attempted murder, and a few fist fights—none of it gorey.

I’d feel comfortable letting teens 12 and up read this. I think it has strong examples of good and bad behaviors, a solid underlying message about not listening to your personal demons, and a great story line. I give it 4 1/2 STARS.