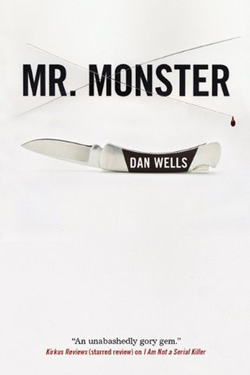 I killed a demon. I don’t know if it was really, technically a demon, but I do know that he was some kind of monster, with fangs and claws and the whole bit, and he killed a lot of people. So I killed him. I think it was the right thing to do. At least the killing stopped.

Well, it stopped for a while.

In I Am Not a Serial Killer, John Wayne Cleaver saved his town from a murderer even more appalling than the serial killers he obsessively studies.

But it turns out even demons have friends, and the disappearance of one has brought another to Clayton County. Soon there are new victims for John to work on at the mortuary and a new mystery to solve. But John has tasted death, and the dark nature he used as a weapon—the terrifying persona he calls “Mr. Monster”—might now be using him.

No one in Clayton is safe unless John can vanquish two nightmarish adversaries: the unknown demon he must hunt and the inner demon he can never escape.

About that Content Warning ^^^ This series is descriptive and a little gruesome. There is demon-killing violence, violence by demons toward humans, and some mild swearing. Also, John gets a little out of control at times. I think 16 and up is a good “umbrella” recommendation, but it should be adjusted for the personality of the teen. It might be a good idea if a parent read this book before giving it to their teen—and discussing it afterward.

That said, I loved it.

As I mentioned in my review for the first book in this series, I read the UK version which I picked up at a writing conference. (See UK cover below.) I liked that first book so much that I immediately started the second one.

I was slightly less impressed with the plot in Mr. Monster, but still thought it was very good. The writing is wonderful. The characters are realistic, especially John, their thoughts and actions believable, the family dynamics fascinating.

If I had to sum up a theme for this book, I’d say that as humans, we are often fighting the monsters around us and the monsters within us at the same time. And sometimes, it’s hard to tell the difference.

I so like the continuing message that it’s our BEHAVIORS, not our thoughts or feelings, that define who we are. That despite what we feel like inside, we can still control what we do. It’s hard. Sometimes we lose the fight. But the fight to be a good person is still worthwhile and honorable.

This one was a little disturbing because John loses the fight with his personal demons a little too often for my comfort, and yet, in the end, he pulled through.

Again, I recommend this book to older teens and readers who enjoy horror. It didn’t completely freak me out, but I did hesitate to turn out the lights at bedtime.