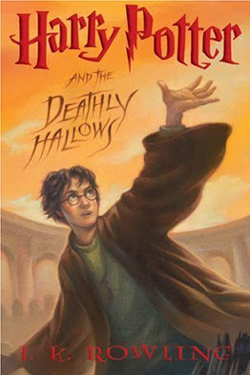 In Harry Potter and the Deathly Hallows, the seventh and final book in the epic tale of Harry Potter, Harry and Lord Voldemort each prepare for their ultimate encounter.

Voldemort takes control of the Ministry of Magic, installs Severus Snape as headmaster at Hogwarts, and sends his Death Eaters across the country to wreak havoc and find Harry. Meanwhile, Harry, Ron, and Hermione embark on a desperate quest the length and breadth of Britain, trying to locate and destroy Voldemort’s four remaining Horcruxes, the magical objects in which he has hidden parts of his broken soul. They visit the Burrow, Grimmauld Place, the Ministry, Godric’s Hollow, Malfoy Manor, Diagon Alley...

But every time they solve one mystery, three more evolve—and not just about Voldemort, but about Dumbledore, and Harry’s own past, and three mysterious objects called the Deathly Hallows. The Hallows are literally things out of a children’s tale, which, if real, promise to make their possessor the “Master of Death;” and they ensnare Harry with their tantalizing claim of invulnerability.

It is only after a nigh-unbearable loss that he is brought back to his true purpose, and the trio returns to Hogwarts for the final breathtaking battle between the forces of good and evil. They fight the Death Eaters alongside members of the Order of the Phoenix, Dumbledore’s Army, the Weasley clan, and the full array of Hogwarts teachers and students.

Yet everything turns upon the moment the entire series has been building up to, the same meeting with which our story began: the moment when Harry and Voldemort face each other at last.

Like it or hate it, Harry Potter is part of our cultural identity. I would guess that J.K. Rowling has added more new words to our collective lexicon than any other single individual. She is certainly the only author I know of who has created a 7 book series that has continued to grow in popularity and gain readership with each new installment like this one has. The Star Wars franchise is the only other thing I can think of that comes close, and personally, my interest in that series decreased with each installment, while my eagerness for the next HP book increased with each one.

I’ve never seen a more anticipated book than this one in my entire life, and I doubt I’ll ever see it again. The entire phenomenon has been amazing to watch, from both the standpoint of a fan and that of an author/publisher. Even with her literary faults (yes, from a technical point of view, she has them), this woman has accomplished what authors everywhere dream of. It is truly amazing.

When you have a book that has been anticipated for this long, it’s hard not to be disappointed by something. We all have our favorite characters that we don’t want to see die. We have strong opinions on who is really evil and who isn’t. We have ideas perhaps of how it should wrap up. With so much at stake in this story line, I’m sure every reader will find a place to complain about. But I’m not going to complain—at least, not very much—because I was satisfied with the story. I loved this book. I love this series. Now that it is complete, I can safely say that this series is currently my all-time favorite.

Spoiler Alert: From here out, there will be hints and clues. I do not name any of the people who died, but you might be able to figure it out. I do however name some (but not all) of the people who survived. Read at your own discretion.

I think the biggest question in everyone’s mind is who is going to die and who is going to live. Some of the deaths were expected, some of them not. While many of them were sad, there were only two that were absolutely shocking to me. I’m not going to include the deaths of people we don’t really know, but of the major characters—those who have been with us through several books—I do have a few comments. But I don’t want to give anything away to those who are still reading, so…

Death #1—The first member of the Order of the Phoenix to die. I was okay with this one. Sad, but he died fighting the Death Eaters.

Death #2—The unexpected stabbing. Totally shocked! Did not in my wildest imagining see this one coming. Very sad. I couldn’t believe it. I’m still reeling.

Death #3—I sort of figured this one would have to happen. His real nature was as I suspected it would be and I’m glad to be right about it. To have it otherwise would have made other characters suspect.

Death #4—One of the D.A. The other complete shocker! Very sad about this one. I’m curious to see if Rowling explains why she chose this one to die.

Deaths #5 & #6—More of the Order. I knew some from this group would die. I was sorry about these two. I was attached to them but at least they went together. And I could see the circular storyline immediately.

Death #7—Another D.A. At first this one didn’t register with me, then I remembered him from earlier books and what a sweet child he was.

Death #8—Had me worried for awhile until I realized he wasn’t really dead. (Not Harry.) I was going to be really mad if he died, but he didn’t. Rowling mentions in an interview that he was never even considered for death because she wanted him at the beginning and the end. Very good.

Death #9—Or is it? This is THE ONE everyone wants to know. I think she did a great job with this. I liked how Harry’s loved ones went into the forest with him. I thought that was cool, kind of wrapping it all up.

Death #10—Well, duh. I liked the way this was resolved. It worked for me.

Now for the critical evaluation:

A good portion of the story’s timeline seemed to be spent waiting for something to happen. I would have preferred to have the finding and destruction of the various horcruxes spread a little more evenly throughout the book. I would have liked a final summary of the horcruxes and their disposition because sometimes it was hard to remember without referring to notes. I very much liked that it wasn’t just Harry who saved the day, and the others got their turns at being the hero. I did think it was a little lame when Ron and Hermione so easily resolved the one, when the others were a huge ordeal.

There were so many characters in this book that it was challenging to keep them all apart. There were places where we were obviously supposed to recognize who someone was, but it took me a bit to figure it out.

There were a few long info dumps to bring us up to speed with Dumbledore and Snape. They were a little slow, but I really don’t know how she could have done otherwise without doubling the size of the book. And we needed that information.

I really liked what she did with Kreature. It had always bothered me a bit the way everyone treated him. And I cracked up when Ron finally “got SPEW.”

The last chapter (epilog) was my least favorite—not because of who survived or what had become of them, but because it didn’t follow up with everyone as fully as I would have liked. There are characters that I care about and I had no clue what happened to them after the final battle. We’re even left hanging about a few of the major characters. I mean, we know who survived and who married who, but what are they doing? What were their career choices? This was not as satisfying as I’d hoped it would be. Fortunately, Rowling has done a couple of interviews and answered many of those questions. If you’d like to read them, they are here and here.