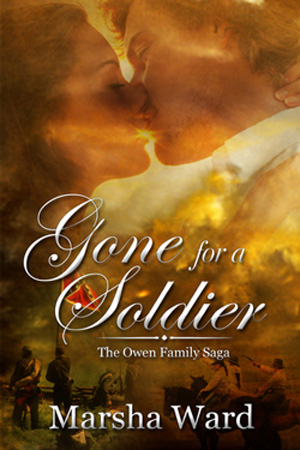 When Virginia secedes from the Union, Rulon enlists, and finds himself fighting foes both in battle and in his own camp. He struggles to stay alive against all odds, with a knife-wielding tent-mate and a Union army that seems impossible to defeat. It will take every ounce of vigilance he has to survive and, with a little luck, he might make it home to his wife and the son he's never seen.

Forced to live with her parents for the duration, Mary faces a battle for independence. With a mother whispering that her husband won't come home to her and a son who needs her to be both father and mother, Mary has to dig deep for strength to overcome her overwhelming loneliness and the unknown future ahead.

Separated by war and circumstance, Rulon and Mary discover that not all enemies wear the Union blue.

I probably only read five or six historical novels a year. While I don’t dislike them, I’m just usually more into contemporary or speculative fiction. But when Marsha Ward has a new book out, I make sure it hits my ‘To Read’ pile.

Marsha has a way of writing solid characters, that are true to the habits and customs of their time period, without making them too much of a stretch for our modern sensibilities. She focuses on those emotions and feelings that are true to all humans, regardless of the era of their birth.

Gone for a Soldier focuses most on Rulon Owen, the oldest of the Owen brothers. Set against the back drop of the Civil War, it follows Rulon’s love story with Mary Hilbrands and his experience of war. But it’s also the story of his family—his brother Ben and his courtship with Ella Ruth, and to a lesser extent, his other brothers, Peter, Carl, and James, who also go to war; and his parents, Rod and Julia. The entire family is impacted by the ravages of war, and since they are fighting for the South, you know it’s a battle they won’t win. Knowing this ahead of time, the stories pulled at my heart even more.

I think my favorite characters in this book are the women—I was so impressed with the strength and determination of Mary, Ella Ruth, and Mother Julia. All of them faced hardship and rose to the challenge. From the courage of a naive young woman birthing a child, to the determination of a spoiled rich girl who learns to serve others, to the strength of a mother who protects her home and family—so, so inspiring.

As expected in a story of the harshness of war, there is swearing, violence and bloodshed—some of it a little icky, but I felt Marsha was very restrained. There are some fairly straightforward references to physical intimacy, but it’s not descriptive. I recommend Gone for a Soldier to readers 15 and up.

Marsha Ward is an award-winning poet, writer and editor, with over 900 pieces of published work, including her Owen Family Saga. She is the founder of American Night Writers Association, and a member of Western Writers of America and Women Writing the West. A workshop presenter and writing teacher, Marsha makes her home in a tiny forest hamlet in Arizona. When she is not writing, she loves to spoil her grandchildren, travel, give talks, meet readers, and sign books.

4 responses to “Review + Giveaway: Gone for a Soldier by Marsha Ward”