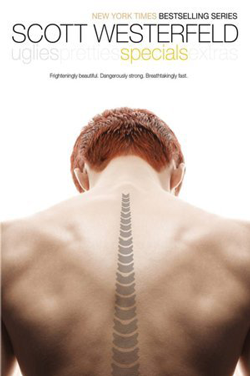 "Special Circumstances": The words have sent chills down Tally's spine since her days as a repellent, rebellious ugly. Back then Specials were a sinister rumor—frighteningly beautiful, dangerously strong, breathtakingly fast. Ordinary pretties might live their whole lives without meeting a Special. But Tally's never been ordinary.

And now she's been turned into one of them: a super-amped fighting machine, engineered to keep the uglies down and the pretties stupid.

The strength, the speed, and the clarity and focus of her thinking feel better than anything Tally can remember. Most of the time. One tiny corner of her heart still remembers something more.

Still, it's easy to tune that out—until Tally's offered a chance to stamp out the rebels of the New Smoke permanently. It all comes down to one last choice: listen to that tiny, faint heartbeat, or carry out the mission she's programmed to complete. Either way, Tally's world will never be the same.

I was a little worried after finishing Pretties. I had really loved Uglies. Pretties was okay, but it seemed to unravel a bit and loose ends were left hanging. But as I said in my review, I was willing to withhold judgment until I had a chance to read this one.

Specials did not disappoint.

Being a Special is totally cool; but to be a Cutter, Dr. Cable’s elite group of Specials, is even better. Specials are scary beautiful, very strong with reflexes so fast they’re almost unbeatable. Tally and co. are sent to bring down the New Smoke and almost start a world war in the process. But as they hunt down the location of the New Smoke, the wild works its magic on Tally again. It changed her once; it’s changing her again.

The pace is fast, a little faster than book 1. The pretty slang wasn’t as annoying as in book 2. Westerfeld wraps up most of the loose ends from book 2. We meet up with Andrew Simpson Smith again. I would have liked more resolution (information) about his clan—like what happens to them—but the little bit we get is okay.

We revisit the cycle of friendship and betrayal between Shay and Tally, explore the relationship between Tally and Zane, catch up with David, and visit another city that is very different from Tally’s.

There is a little bit more swearing in this book than in book 2, but compared to many teen books it’s not so much. There is violence and people die. One of the deaths is particularly sad and I really didn’t see it coming, but after considering it for a few days I guess I can see why Westerfeld wrote it that way.

There’s a great quote in the last chapter: “You see, freedom has a way of destroying things.” Something to ponder. Interestingly, Westerfeld says it’s his most quoted phrase.

Some of the themes in this book are how our actions often have serious consequences that we never intended, and yet we’re responsible for them all the same; how we stay the same inside, regardless of how often or how drastically we change our outsides; the Star Trek classic of the needs of the many outweighing the needs of the one. I also really liked the portrayal of Tally’s struggle against her internal programming. We all face this struggle on some level, to overcome the programming of our past. All of this makes for some great discussion.

I LOVE this series.