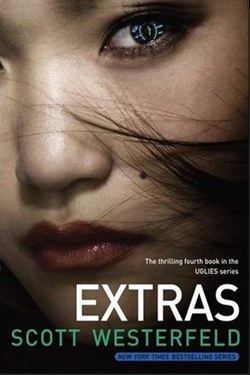 It's a few years after rebel Tally Youngblood took down the uglies/pretties/specials regime. Without those strict roles and rules, the world is in a complete cultural renaissance. "Tech-heads" flaunt their latest gadgets, "kickers" spread gossip and trends, and "surge monkeys" are hooked on extreme plastic surgery. And it's all monitored on a bazillion different cameras. The world is like a gigantic game of "American Idol." Whoever is getting the most buzz gets the most votes. Popularity rules.

As if being fifteen doesn't suck enough, Aya Fuse's rank of 451,369 is so low, she's a total nobody. An extra. But Aya doesn't care; she just wants to lie low with her drone, Moggle. And maybe kick a good story for herself.

Then Aya meets a clique of girls who pull crazy tricks, yet are deeply secretive of it. Aya wants desperately to kick their story, to show everyone how intensely cool the Sly Girls are. But doing so would propel her out of extra-land and into the world of fame, celebrity...and extreme danger. A world she's not prepared for.

This is a good book. It might be a great book, except that I miss Tally from the first three books.

**SPOILER: Yes, she does put in a cameo appearance in this book but…***

It took me a little bit to get into Aya’s world and the changes that Tally’s revolution brought about. But once I shook myself out of my pout over missing Tally, I quite liked it. Like Tally, Aya is strong and resourceful and about to uncover a mystery. It was fun to get her take on Tally and the Pretty system. It was also interesting to see how Westerfeld was able to build an entirely different society within the outlines of a world so many readers loved.

While I’m not a enthusiastic about Aya and the Extras, if you liked the Uglies series, you need to give this one a try.