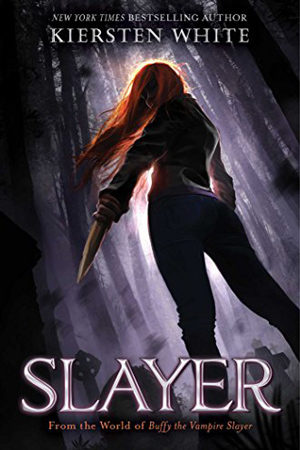 Into every generation a Slayer is born…

Nina and her twin sister, Artemis, are far from normal. It’s hard to be when you grow up at the Watcher’s Academy, which is a bit different from your average boarding school. Here teens are trained as guides for Slayers—girls gifted with supernatural strength to fight the forces of darkness. But while Nina’s mother is a prominent member of the Watcher’s Council, Nina has never embraced the violent Watcher lifestyle. Instead she follows her instincts to heal, carving out a place for herself as the school medic.

Thanks to Buffy, the famous (and infamous) Slayer that Nina’s father died protecting, Nina is not only the newest Chosen One—she’s the last Slayer, ever. Period.

As Nina hones her skills with her Watcher-in-training, Leo, there’s plenty to keep her occupied: a monster fighting ring, a demon who eats happiness, a shadowy figure that keeps popping up in Nina’s dreams…

But it’s not until bodies start turning up that Nina’s new powers will truly be tested—because someone she loves might be next.

One thing is clear: Being Chosen is easy. Making choices is hard.

First, waving my geek flag here—I’m a true blue Buffy the Vampire Slayer fan. This is a spin-off and I was a little worried that I wouldn’t like it because it’s always a gamble when your fav fandom gets a reboot. But it worked. It was great!

There were several references and connection to the original Buffy characters and events. That was fun. Buffy herself only shows up in dream sequences.

If you remember the end of Buffy, she broke the “only one slayer” rule and all potentials became slayers. This books begins by referencing that Buffy broke something else, and Nina is the last potential to become a Slayer.

There is a “hunter” who is after Nina and her twin sister. There are clues all through the book, but I could never say with certainty who it would be. Nor who the bad guy would be. When they were revealed, it was both surprising and satisfying.

I was thoroughly engrossed in the story. There were twists and surprises. I felt it did justice to the old canon while introducing new characters and new rules. It gets violent at times, but that’s what you’d expect for vampire slayers.

I loved it and can’t wait for the next one. Recommended for Buffy fans, 14 & up. Moderate+ content rating for language and violence. 4.75 STARS.