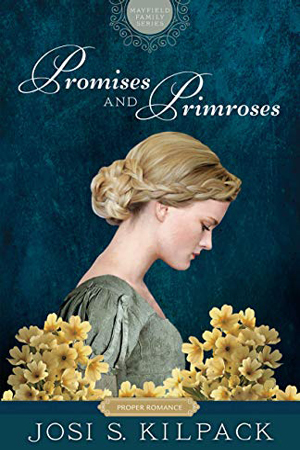 Lord Elliott Mayfield has done his best to take care of his family, first his siblings and now his nieces and nephews. Unfortunately, he sees this new generation moving in the same direction of bad matches and scandalous relationships as the last. In hopes to change their course, he establishes a “marriage campaign” to motivate them to improve themselves through making respectable matches. With his heart in the right place, what could possibly go wrong?

Peter, Elliott’s eldest nephew, thinks the entire idea is ridiculous. A widower with two young daughters, he simply needs a governess, not a wife. Julia Hollingsworth certainly has the credentials and the experience, but is altogether too young and pretty for such a job. So why can’t he stop thinking about her?

Julia loves working as a governess, despite the objections of her mother, Amelia. And as it turns out, Amelia has a lot to say about the Mayfield men—none of it good. But Julia dismisses the rumors of ruined reputations and instead concentrates on helping Peter with his children and his fledgling business in canine husbandry. His kindness and gentleness is endearing—and increasingly attractive.

But Amelia, whose heart was broken thirty years ago by none other than Elliott Mayfield, is determined to prevent any relationship from blooming either between Peter and Julia—or between herself and Elliott.

Hearts and history collide as both couples must face their pasts and decide if risking it all is worth the promise of new love and a new future.

I know I say this every time I review a Josi S. Kilpack book, but I love her stories. They are so character-driven, and include themes that speak to all ages and time periods.

Promises and Primroses is the start of the Mayfield Family series. Years ago, Elliott inherited the family estate. Ashamed of the behaviors of his family members, he made it his mission to improve both the estate and the members of the family—breaking a heart in the process.

Now, Elliott has embarked upon a marriage campaign, designed to entice his nieces and nephews into becoming better people and making good marriages. (I don’t see any way this could go wrong, do you?) For his first campaign, he chooses Peter, the only “good” one of the bunch and Elliott’s heir. This campaign goes badly from the beginning and brings Elliott face-to-face with the heartbreak from his past.

Fear can make it hard to forgive, and to trust other people. … And the opposite of fear is another word that starts with f—faith.

Peter is a widower looking for a governess to care for his two young daughters. Julia is a woman determined to live the life she chooses. She is the perfect woman for the job, but Peter’s commitment to propriety causes him to reject her.

As the story unfolds, we realize that this is two love stories intertwining through the years, with past heartbreak unfairly coloring new possibilities. This adds depth and interest to the overall story.

I think we could drive ourselves mad trying to make sense of what could have been. … The best any of us can do is hold onto joy when it comes and enjoy it fully while it lasts so that we might draw every lesson from it and be better for the hurt we suffer.

The characters are wonderfully written. Each of them has an arc that moves them from fear to faith, from heartache to hope. Although not the main character, Amelia has perhaps the greatest character arc in this story. She starts as loving but controlling and sometimes cruel. As the story progresses, we realize that she has good reason for her feelings (albeit based on a misunderstanding), and everything she does is motivated by love for her daughter. (I really disliked her at times, but love her by the end of the book.) I’ll let you read the book to discover the arcs of Julia, Peter, and Elliott, but they each become stronger and better people.

I liked the changing points of view of the different chapters. It really allowed me to see into the hearts of these characters. I loved the dogs, which brought something unique to the story. And I loved the primroses that subtly reflected the themes.

I look forward to more about this family. Elliott has seven nieces and nephews, with a marriage campaign for each of them. I’m excited to read them all! I recommend this book to lovers of Regency romance and I give it a full 5 STARS.