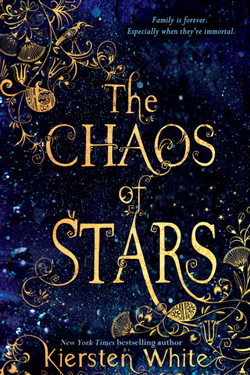 Isadora’s family is seriously screwed up.

Of course, as the human daughter of Egyptian gods, that pretty much comes with the territory. She’s also stuck with parents who barely notice her, and a house full of relatives who can’t be bothered to remember her name. After all, they are going to be around forever—and she’s a mere mortal.

Isadora’s sick of living a life where she’s only worthy of a passing glance, and when she has the chance to move to San Diego with her brother, she jumps on it. But Isadora’s quickly finding that a “normal” life comes with plenty of its own epic complications—and that there’s no such thing as a clean break when it comes to family. Much as she wants to leave her past behind, she can’t shake the ominous dreams that foretell destruction for her entire family. When it turns out there may be truth in her nightmares, Isadora has to decide whether she can abandon her divine heritage after all.

I’m not super familiar with Egyptian gods and goddesses, so I have to admit, I found this book really confusing in the beginning. There were a lot of characters thrown at you right away. Add to that the switching from past to present, with some backstory thrown in and it became so confusing for me that I put it down a few times during the first several chapters, wondering if it was worth it to finish.

But I’ve liked Kiersten White’s other books SO MUCH that I decided I really needed to perservere. And I’m glad I did.

I went back to the very beginning of the book, and this time, I took notes. And I made myself a chart. Here. (Click to enlarge) 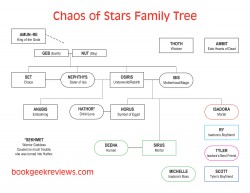 With this character chart to help me sort things out, the book got a lot easier to read—and therefore, a lot more interesting.

(And I’ll just say here, if you come across a name that’s not on my chart, you really don’t need to worry about it.)

This is basically a young adult romance, set against the backdrop of Egyptian mythology. It has all the elements of a contemporary romance, with the added interest of a little magic thrown in. I liked the contrasts between the two worlds—Ancient Egypt and modern day. I liked the way White let us smell and taste and feel all the richness of the settings.

I had a little trouble with Ry, the love interest. I felt his backstory was predictable and the way he helped save the day was a little out there. As was Isadora’s design capabilities. The characterizations of Isadora’s friends were not very deeply explored, and her family members were on the flat side.

I also wondered how she could be so tech savvy and up on modern cultural things when she was supposedly so isolated while growing up. But I decided to let that go and just enjoy the story.

As far as the romance, it’s very clean. There is casual mention and jokes about certain body parts and bad behavior on the part of the gods—which is all part of the Egyptian mythos—but it might make some readers uncomfortable.

I can’t say that I loved this book—at least, not the way that I’ve loved the Paranormalcy trilogy or the Mind Games books—but once I had my chart I enjoyed the story. It was a quick, fun read and I think its target reader—teen girls—will really like it.

One response to “The Chaos of Stars by Kiersten White”