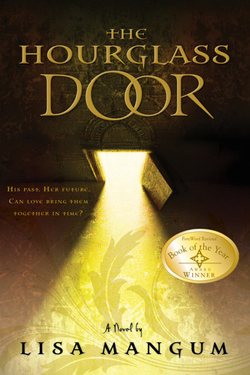 His past. Her future. Can love bring them together in time?

Abby’s senior year of high school is going according to plan: good friends, cute boyfriend, and college applications in the mail. But when Dante Alexander, foreign-exchange student from Italy, steps into her life, he turns it upside down. He’s mysterious, and interesting, and unlike anyone she’s ever met before. Abby can’t deny the growing attraction she feels for him. Nor can she deny the unusual things that seem to happen when Dante is around. Soon Abby finds herself drawn into a mystery whose roots reach into sixteenth-century Florence, and she uncovers a dangerous truth that threatens not only her future but the lives of those she loves.

Abby is a senior in high school, with her life all lined up. Then she meets Dante—and her world turns upside down. He’s cute, mysterious, and odd things happen when he’s around.

I really liked this book. In fact, the only thing I didn’t like was I felt Abby abandoned her girlfriend to a guy she at first knew was a bad influence, and later learned was downright evil. The consequences to her friend were pretty shattering. I would talk to my kids about this and that in a similar situation, they had a moral responsibility to help their friend and to tell an adult what was happening. Other than that, I loved this story.

The Hourglass Door is a paranormal romance—meaning that it mixes fantasy and reality into the love story and that one or more of the characters have paranormal powers/strengths. Immediate comparisons with Twilight come to mind. Dante is not quite as compelling as Edward, however, he’s got more depth. His goodness comes from his character, and not simply from the fact that he’s beautiful and he doesn’t eat people.

(But he wouldn’t—eat people, that is—because this is not a vampire story, and he’s not a vampire, and there are no vampires anywhere in the book. Dante is the paranormal character in the story but I’m not saying anything more because who and what he is and what he can do is a huge part of the story.)

Abby is more likeable than Bella. She’s sensible and has a good head on her shoulders. She doesn’t change her entire life because she meets a cute guy. Abby has brains, and although not perfect, she tries to be a good person.

The love story is also more believable than Twilight. It’s based on shared experiences, communication, and you can see why Abby and Dante would like each other. Also, he doesn’t watch her while she sleeps (creepy), nor does she keep trying to seduce him.

That said, if you liked Twilight, you’ll probably like this one as well. The action is good. There are good guys and bad guys (really bad guys). It’s intense and thrilling—and the ending sets up a great sequel. I loved this book.