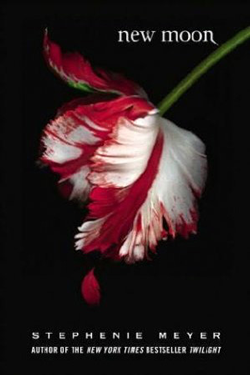 I knew we were both in mortal danger.

Still, in that instant I felt well. Whole. I could feel my heart racing in my chest, the blood pulsing hot and fast through my veins again. My lungs filled deep with the sweet scent that came off his skin.

For Bella Swan, there is one thing more important than life itself: Edward Cullen. But being in love with a vampire is even more dangerous than Bella ever could have imagined. Edward has already rescued Bella from the clutches of one evil vampire, but now, as their daring relationship threatens all that is near and dear to them, they realize their troubles may be just beginning…

New Moon is book #2 in a series about a teenage girl who is in love with a vampire. In Twilight (book #1), we’re introduced to Bella when she moves to cloudy Forks, Washington to live with her father. She very quickly falls in love with Edward, one of a family of “good” vampires who do not drink human blood. He reluctantly falls in love with her and through trials and danger, their relationship develops.

In New Moon, Edward decides he is a danger to Bella, breaks her heart and leaves. After months of depression, Bella develops a friendship with Jacob Black, a young man who lives on the reservation in a nearby town. His friendship is the only thing that eases her heartache. I don’t want to spoil the story for anyone planning to read it, but it includes killer vampires, werewolves, and a trip to Italy where Bella races to save Edward’s life.

I have ambivalent feelings about this book. I like fantasy so I’m predisposed to like this book. I also am a Buffy the Vampire Slayer fan, which means I like vampire stories (if they’re not too scary). Meyer has an interesting take on the vampire and werewolf legends that I found unique and fresh. New Moon is more cohesive than her first book. It flows more smoothly, the characters are better developed, the dialogue more natural. It also diverges from the traditional romance devices which I appreciated. (I am not a big fan of romance novels.)

However, I still have issues with it. First, Bella is an idiot. I know she’s a teenager, and by definition, is not going to think things through, but still. It was outside the realm of believability at times. (I don’t want to be specific, but you’ll know what I mean if you read the book.)

Second, I really, really have an issue with some of the subliminal messages: it’s okay for girls to give up everything, who they are, their identity for love; if the girl loves the “bad boy” enough, he will change for her; if you’re sad and depressed, an appropriate cure is to do something reckless and life threatening. As an adult, I can look past this and still enjoy the story. But this series is marketed as YA. In the first book, Bella is 16, turning 17. That means the target audience is 14 year old girls. Most girls this age see the world through highly romanticized eyes in the first place. They do not have the ability to discern and reject these messages, and therefore, may internalize them and go looking for a bad boy of their own. If you allow your daughter to read it, I’d very much suggest you read it as well and talk to her about these issues, pointing out the fallacies in Bella’s thinking and the foolhardiness of some of her behaviors.

Having said that, I have to admit that I did like this book—not as much as a dyed-in-the-wool romance reader would, but I still enjoyed it. And contrary to 99% of the Twilight fan club, I want Bella to end up with Jacob because, in my opinion, he’s the better guy. I know it will never happen, and I’m not sure that I really want him to end up with her, she is an idiot, after all.

Will I read books three and four? Yes, because even with the typos, grammatical mistakes and a few plot holes, Meyer is still a good storyteller.

« My Not So Fairy-Tale Life by Julie Wright
Sheep’s Clothing by Josi S. Kilpack »