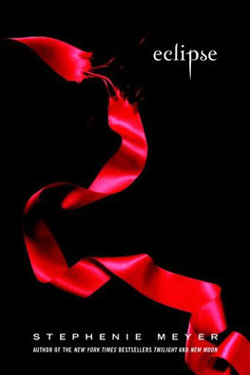 In the dead silence, all the details suddenly fell into place for me with a burst of intuition.

Something Edward didn't want me to know. Something Jacob wouldn't have kept from me...

It was never going to end, was it?

As Seattle is ravaged by a string of mysterious killings and a malicious vampire continues her quest for revenge, Bella once again finds herself surrounded by danger.

In the midst of it all, she is forced to choose between her love for Edward and her friendship with Jacob—knowing that her decision has the potential to ignite the ageless struggle between vampire and werewolf.

With her graduation quickly approaching, Bella has one more decision to make: life or death. But which is which?

Despite my negative comments about Bella’s IQ level, I’ve liked this whole Twilight series. As a writer, Stephenie Meyer is not my favorite, but she’s getting better with each book. And she is a strong storyteller—as evidenced by the popularity of this series.

I still think Bella is an idiot. Seriously. My 17-year-old daughter and I have a mantra, “Bella is an idiot.” We don’t understand her motivation. And I really don’t get this relationship. Why does Bella love Edward? Because he’s beautiful. Why does Edward love Bella? Because she smells so good he wants to eat her. Now that’s what deep and lasting relationships are made of!

(That was sarcasm, just in case you didn’t catch it.)

Also, again, I have an issue with stories where the girl changes to please/get the guy. I’d really like to see Edward changing more for her. Although, I suppose NOT eating her is a big compromise on his part.

I don’t like the fact that Edward comes in her room and watches her sleep every night. Nor do I like that Bella practically begs Edward to have s~x with her. However, I will say that I do like that they resist that temptation. I find that to be consistent with their characterization. I lost a little of my enthusiasm for Jacob in this book, but I still prefer him over Edward.

I have no problem with adults reading the series, as they should be mature enough to separate fantasy from reality. And if parents will read the book with their teenage girls and DISCUSS it, then I’m okay with that. It does bother me a little when I see 11- and 12-year-olds reading it.

But, even with all this negative commentary from me, I have to say that I do still like the series, and I’ve had a lot of fun with it over on my personal blog.

One response to “Eclipse by Stephenie Meyer”