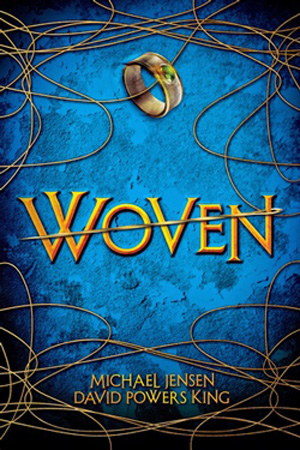 Two unlikely allies must journey across a kingdom in the hopes of thwarting death itself.

All his life, Nels has wanted to be a knight of the kingdom of Avërand. Tall and strong, and with a knack for helping those in need, the people of his sleepy little village have even taken to calling him the Knight of Cobblestown.

But that was before Nels died, murdered outside his home by a mysterious figure.

Now the young hero has awoken as a ghost, invisible to all around him save one person — his only hope for understanding what happened to him — the kingdom’s heir, Princess Tyra. At first the spoiled royal wants nothing to do with Nels, but as the mystery of his death unravels, the two find themselves linked by a secret, and an enemy who could be hiding behind any face.

Nels and Tyra have no choice but to abscond from the castle, charting a hidden world of tangled magic and forlorn phantoms. They must seek out an ancient needle with the power to mend what has been torn, and they have to move fast. Because soon Nels will disappear forever.

A Delightful YA Fantasy!

This is a wonderful Young Adult book, but Middle Graders and adults will enjoy it, too. It has classic fantasy elements, as well as lots of original ideas. I loved the magic system—with sorcerors, witches, and even ghosts.

Filled with adventure and intrigue, I’d definitely place this in the epic fantasy category, but without the longer passages that sometimes bog down that category in books targeted to adult readers.

This is great writing from two debut authors. I look forward to seeing more from both of them.

The writing is uncluttered, but beautiful in its simplicity—making for a very easy read. The plot was strong, with a natural pacing and enough twists to keep you involved. I really liked the journey to find a way to sew Nels’ ghost back into his body. It was hard for me to put it down.

The characters were varied, with clever and distinctive voices. The dialog cracked me up at times. Nels and Tyra had believable character arcs, although I think Nels was the more stronger character (even though he’s a ghost). Tyra, the spoiled princess, seemed to change too quickly at times.

This kept me reading late into the night. Although the book is complete in itself, I would love to see a sequel. I recommend this to anyone who enjoys YA fantasy. I give it 4 1/2 STARS.