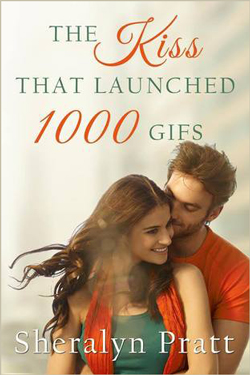 Each weekday from 2:00-4:00 p.m., Grace and Ashton cohost Battle of the Sexes, a radio program arguing the he-said/she-said issues of the day. Their fiery debates often have listeners wondering if there’s more to their relationship than just talk, even though Grace has been dating Phillip, Mr. Tall, Dark, and Perfect, since long before she ever met Ashton Miller.

Yet when news comes that Battle of the Sexes is on the bubble for cancellation, Grace and Ashton need to step up their efforts to engage their audience to keep the show alive. When a charity organization approaches them and proposes that the two of them kiss for a fund raiser, Grace and Ash agree to kiss for a good cause. A kiss is just a kiss, right?

For me to like a contemporary romance, there needs to be a “something.” It’s hard for me to put my finger on what the “something” is but I do know it’s not the romance itself. The best I can do is say it’s got to be either highly character driven and the characters are fun or interesting, or there’s something of depth there. This one has both. While 99% of the book was light and fun, there’s a very serious topic and scene that makes me want to recommend this book to EVERYONE.

Grace and Ashton couldn’t be more different on the surface—he’s a laid-back jock, she’s a Type A through and through. But they are both clever, verbally quick, and good people deep down—and their Instagram war was  hilarious. Megan (Ashton’s niece) was a minor character, but she was also very clever and well-written. In fact, all of the characters were completely believable.

The plot, the back-and-forth POVs, the tension that built throughout the entire story, and a few twists kept me interested through the entire book. Several places made me literally laugh out loud, and lots of them made me smile. I should have tagged them all as I read, but I was too anxious to read more. One that stood out was after Grace and Ashton kissed for charity, she said to her good friend:

“Not to be gross, but I’m pretty sure my ovaries dropped an egg at some point during those 43 seconds.”

Yep, I hooted over that one.

I consider this a clean romance, with a heads-up to sensitive readers. The sexual tension was pretty high between Grace and Ashton, and there were allusions to an intimate relationship between Grace and her boyfriend, Phillip. There was a lot of flirting, a couple of passionate kisses, and a hand on someone’s behind. I’d say 18 and older readers.

Now for that 1%. Near the very end, there is a scene where a woman calls in to the radio show with a concern about her son. Ashton fields the call and delivers one of the best discussions on what constitutes consent vs rape that I’ve ever read. Out of character for the radio show, but not for what the reader knows to be Ashton’s true personality, he compares rape to other felonies, beginning with:

“…it makes me sad that in our culture rape is the only crime I know of where the guilty party can claim that they are innocent because they were too tempted not to take what they wanted.

I think Ashton’s full discussion is a great way to talk about rape and consent with teens, so if you’re a parent, you may want to get the book, just for that. (It’s near the end.)

I did have a bit of an issue with the quality of the book itself—not the writing or the story, but there were more typos and cut and paste errors than I like to see in a final product. To me, it seemed like it had missed the final proofing. It pulled me out of the story a few times, which was frustrating for an otherwise excellent book.

But overall, I give this 4 1/2 stars. If you like fun contemporary romances, I think you’re going to really like this one.

Sheralyn has been a karate instructor, musical theater performer, a beach bum, freelance writer, nomadic traveler, and, yes, a private investigator. At the moment she enjoys working with and training her dog to give the poor thing breaks from sitting and Sheralyn’s feet with the unbearable task of watching someone write a book.

One response to “Review: The Kiss That Launched 1000 GIFS by Sheralyn Pratt”