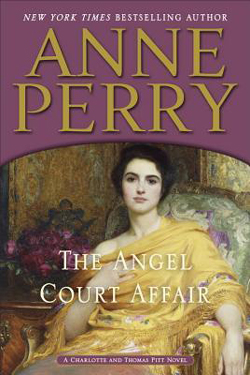 As the nineteenth century draws to a close, most of Europe is in political turmoil, and terrorist threats loom large across the continent. Adding to this unrest is the controversial Sofia Delacruz, who has come to London from Spain to preach a revolutionary gospel of love and forgiveness that many consider blasphemous. Thomas Pitt, commander of Special Branch, is charged with protecting Sofia—and shielding Her Majesty’s government from any embarrassment that this woman, as beautiful as she is charismatic, might cause.

When Sofia suddenly vanishes and two of her female disciples are gruesomely murdered, Pitt is challenged as never before. Is Sofia’s cousin, wealthy banker Barton Hall, somehow involved? And why has handsome cricket star Dalton Teague insinuated himself into Pitt’s investigation? Fearful that this sensational crime may trigger an international incident, Pitt welcomes the help of three allies: his clever wife, Charlotte; her great-aunt, Lady Vespasia; and Victor Narraway, Pitt’s friend and former commander at Special Branch. From the narrow streets of Toledo and a lonely monastery high in the hills of Spain, to the halls and wharves of London, Pitt and his friends race against time in their desperate bid to catch a murderer.

Anne Perry is one of the most prolific writers in our time. She has two Victorian mystery series that together comprise 50 (or more) books. That is amazing! I’ve read half a dozen of the Charlotte and Thomas Pitt series, and I generally don’t like them as well as the William Monk series. But this one… this one was different. It was more of a thoughtful and psychological mystery, than a “found a dead body, now we need to find the killer” story.

A female evangelical “cult” leader is kidnapped and two of her associates are murdered. It is believed she was taken due to her unpopular teachings. Pitt has to find her before she is murdered as well. Thus goes the mystery, with the usual clues and red herrings. As usual, I did not figure out who the bad guy was until the very end—just pages before it was revealed. (I like it when that happens.)

I also felt this story mirrored some of the sociological and political attitudes going on in the United States (and around the world) right now, and echoed many of the thoughts and feelings I’ve had lately. Here are just two of the quotes that made me think:

People don’t always think ahead. …If we could see the end of the road, half the time we’d stop before we took the first step. Sometimes if we knew what something would cost, our courage would fail. (Pitt)

That is the essence of faith and courage, of choice and consequences, of taking action based on our beliefs. Sometimes we need to think ahead, to consider the consequences. And sometimes we take a leap of faith, because it is the right thing to do, knowing that consequences will follow.

Why did Sofia Delacruz’s message frighten people and make them so angry? Is this what we have become, killers of those we do not understand? (Laurence)

If you’ve been on Facebook at all these past few months, you know why this one struck home. So much of it is ridicule, derision, and threatening comments toward those who believe differently than the commenter. Political stands, morality, what is good and what is not…so many, many angry people.

If you like Victorian (1900s) detective mysteries, I recommend this. It’s a slower read, to follow the thoughtfulness of the freedom of religion and speech theme, and I felt Perry may have had too many of her characters pondering on the religious aspects, but I really liked it anyway. If you want to ponder some of these things, read it. 4 stars.