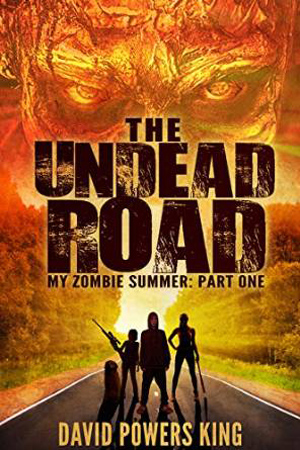 Nothing brings the family together like a zombie apocalypse …

Fifteen-year-old Jeremy Barnes would rather watch a zombie movie than shoot a real one, but he has no choice if his family wants to survive the end of the world. Their plan? Drive across the infected United States to a cabin in the Colorado Rockies without a scratch, but their trip takes a complicated detour in the middle of Nebraska when they find Kaylynn, a girl who can handle a baseball bat better than Jeremy can hold a .45 Beretta. And when they stumble into a sanctuary, Jeremy soon learns that Kaylynn is stronger than she looks—a deadly secret lies inside her.

After the radio picks up a distress call from Kansas City about a possible cure, Jeremy’s parents go with a team to investigate. They never return. The only way to find their parents is for Jeremy and his sister Jewel to rely on a dangerous girl who might just turn on them at any moment.

A Clever & Not too Freaky Zombie Book!

Some zombie books are just too much—too freaky, too scary, too much blood and guts. For example, The Walking Dead. (Yes, I know. It’s a tv show, not a book.) After the first season, I quit watching because it quickly became a weekly bloodfest and I just got tired of it.

The Undead Road by David Powers King is NOT like that. It’s a wonderful story of family, courage, friendship and loyalty, set against a backdrop of a post-apocalyptic zombie world. Well written, strong characters, believable plot—if you like speculative YA, you’ll like this—even if you don’t like zombies.

It’s been a week since the outbreak of the infection that turns people into Vectors (zombies). Jeremy and his family are headed to a cabin in the west, where they hope they can find safety and wait out the disease. Along the way, they meet Kaylynn, a girl who has been successfully avoiding the Vectors on her own. They make it as far as David City, where they think they’ve found sanctuary, but after Jeremy’s parents leave to find a cure for the infection, the Vectors attack. Jeremy, his sister Jewel, and Kaylynn barely escape, and are following a map to where they think their parents have gone.

First, the characters. This is what makes or breaks a book for me, and this cast of characters is wonderful. Jeremy is just a good kid whose world has fallen apart. He’s funny and brave and trying to figure it all out. 100% believable. I  loved the interplay between him and his family. His sister Jewel is awesome! Kaylynn, the teen girl they find along the road to safety, is hard to understand at first, but then when you realize why (no spoilers) it makes perfect sense. The dialog is clever, funny at times, always spot on. Even the turncoats and crazies were well-written and motivated.

I loved that Jeremy is part of a strong family. His parents are smart, savvy, and loving. This is rare in Young Adult novels, particularly in the speculative category. He also has a good relationship with his little sister. They are separated from the parents in a reasonable way, so they are forced to navigate the world and solve their problems on their own, but it’s the love for and trust in their parents that help them out of many of the situations they find themselves in.

[bctt tweet=”Nothing brings the family together like a #zombie #apocalypse THE UNDEAD ROAD http://amzn.to/1Su4nPJ #amreading”]

The plot was fast paced and moved smoothly from point to point. I had trouble putting the book down because I really wanted to know what happened next. The mood was not despairing—even though things looked hopeless from time to time. The characters were tenacious in their search for answers. They protected and refused to abandon each other. Part of the ending was sad, because sometimes your love for others demands huge sacrifices. But the characters never gave up. If I ever end up in a situation where I’m running from zombies, I want Jeremy and his family on my side!

There is zombie violence, people die. Occasional swearing. But I’d be comfortable letting teens who enjoy zombie stories read this. In fact, I’d encourage it because the themes of family, loyalty, and love are so strong. I give this book a solid 4 1/2 STARS.

NO PURCHASE NECESSARY; entrants must be 18 years or older; open to residents of continental US only; giveaway begins on the date of this post and all entries must be received by 12:00 Midnight on the last day of the giveaway, Mountain Time; enter using the Rafflecopter form; giveaway prize is as described in this post; number of eligible entries received determines the odds of winning; BookGeekReviews.com is not liable for technical problems which may affect entry into the giveaway; winners will be selected after the close of the giveaway using rafflecopter.com randomizer; winning entry will be verified prior to prize being awarded; winner’s information will be forwarded to prize sponsor who will deliver prize; BookGeekReviews.com is not liable for sponsor default; if winner forfeits or does not respond to email within 48 hours, prize may be awarded to another entrant or not, at the discretion of the sponsor; by entering the giveaway you give BookGeekReviews.com the right to publicize your name on the BookGeekReviews.com website and/or social media; this giveaway is in no way associated with Facebook, Twitter, Rafflecopter or any other entity unless otherwise specified; winner agrees to release BookGeekReviews.com from any liability as a result of winning; in no case shall BookGeekReviews.com be held responsible for awarding prize(s) should sponsor(s) default; giveaway subject to Utah regulations; VOID WHERE PROHIBITED BY LAW.