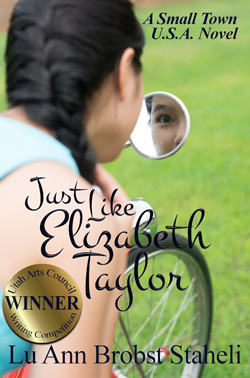 Twelve-year-old Liz Taylor has known for a long time that she would escape—escape the abuse against herself, and against her mother. She just didn’t know how or when.

Then the perfect opportunity comes—money left of the table by her mother’s abuser—and Liz is on the run. But a girl her age doesn’t have many options when it comes to hideouts, making a K.O. A. Kampground and a nearby middle school her perfect choices.

If only she can keep to herself, Liz, now using the name Beth, knows she can make it on her own, until things change, and she realizes she must face her situation head on if she is to save herself and her mom.

Just Like Elizabeth Taylor is an excellent read for girls who need to know they can be brave.

This book deals with some tough issues—specifically abuse by a stepfather. I hate that we need books like this in our library, but I believe that we do. I was lucky. I had kind and loving parents. But as a young girl and teen, I had several friends whose parent (one or the other or both) regularly beat the crap out of them. I was too young back then to know what to do. I didn’t even realize that I should tell someone about it. Perhaps if I’d read a book like this, I would have known to involve my parents and help them.

In listening to my children as they grew up, I know they had friends who had to deal with abuse too. And I see it in public all the time. If an adult will jerk a kid’s arm or smack them in public, you KNOW they’re doing worse in private. So given the fact that abuse occurs in our community, I think teen literature needs to deal with it.

Lu Ann Staheli has done a wonderful job in stating the problem without going overboard with all the gorey details. For that reason, I’d feel comfortable letting a mature 12 year old read the book (or even younger if I thought they were in this situation), and the content would be fine for readers 14 or older.

The book is well written. Liz, the main character, is well-developed. She’s bright and brave; she’s smart and creative. Her actions eventually save not just herself, but also her mother. And she reacts to the situation she’s in very much like my friends did.

With one exception: She. Got. Out.

I think that’s the great message behind this book, whether you’re a 12 year old girl, or a fully grown adult. If you’re in an abusive situation, GET OUT. This story has a happy ending, eventually, and clearly shows that there are loving and kind people in the world who will help you. If you have a friend in this situation, help them know that they have options.

The only concern I have about the book is that Liz solves her problem by running away. For her, it turned out okay. She was able to find a safe place to hide, to get into school, and to pretty much take care of herself. My concern is that other girls might not be so lucky. There are a lot of predators out there. So as a parent, this is a book I’d want to read first and then discuss with my child after they read it, offering alternatives to running away.

As far as quality goes, I give the book 4.5 stars and I recommend it to pretty much every girl 12 and up because you never know who might be hiding an abusive situation like Liz’s.

Lu Ann Brobst Staheli got her start as a celebrity paparazzi-stalker-chick, which led to her award-winning career as a ghostwriter for celebrity memoirs. A masochist at heart, she taught junior high school English for 33 years and then moved to the school library. She once spent two weeks summer vacation backpacking through Europe with 15 of her students. She has won three Best of State Medals–two for writing and one for teaching–but refuses to wear them all at the same time because she’d hate to be known as a show-off.

« The Witnesses by Stephanie Black
Paris Cravings by Kimberley Montpetit »