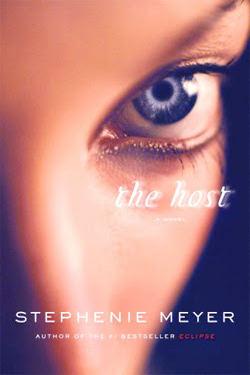 Earth has been invaded by aliens. The war is over and we lost.

Melanie Stryder refuses to fade away. The earth has been invaded by a species that take over the minds of human hosts while leaving their bodies intact. Wanderer, the invading "soul" who has been given Melanie's body, didn't expect to find its former tenant refusing to relinquish possession of her mind.

As Melanie fills Wanderer's thoughts with visions of Jared, a human who still lives in hiding, Wanderer begins to yearn for a man she's never met. Reluctant allies, Wanderer and Melanie set off to search for the man they both love.

I loved The Host by Stephenie Meyer. I’ve read her Twilight books, and aside from the fact that they’re romance and Bella is an idiot, I’ve liked them just fine. But I’m not going to stand in line at midnight to get book #4. (Oh, wait. Actually, I am—but only because my sister and some other friends are having a Girls Night Out on the evening of the debut and we’ve decided to include that in our plans. But I digress.)

Anyway, back to the book itself. I loved it. Oh, yeh. I said that already.

This is billed as a romance, a love-triangle, but for me there was enough thrills and excitement, suspense, and action that I totally didn’t mind the brief kissy-face interludes. Told from Wanderer’s perspective, this is a great look at interaction between species, and what it means to be human. Sometimes the pace is a bit slow, but I liked that. For me, that was part of it’s charm. It gave me some space to breathe in between the tension.

And I loved the way she ended chapter 58. I’m all, “What the HECK?!” It can’t end this way. Thank goodness I turned the next two pages (Stephenie’s kind of clever that way.)

I found this story to have interest and depth. The characters were well-formed and consistent. The plot and logic worked for me. I just really liked it. It’s going on my list of all-time favorites. I even have two copies of it—my daughter gave one to me for Mother’s Day, and then I got a signed copy when Stephenie Meyer came to town. My sister stood in line to get her’s autographed and got one for me as well. (Thanks so much!)