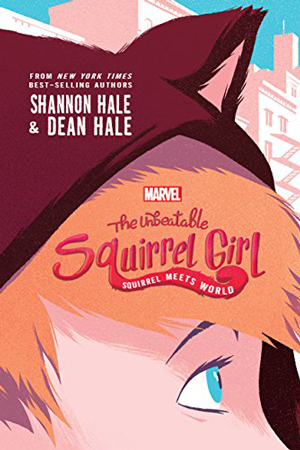 WHO RUNS THE WORLD? SQUIRRELS!

Fourteen-year-old Doreen Green moved from sunny California to the suburbs of New Jersey. She must start at a new school, make new friends, and continue to hide her tail.

After failing at several attempts to find her new BFF, Doreen feels lonely and trapped, liked a caged animal. Then one day Doreen uses her extraordinary powers to stop a group of troublemakers from causing mischief in the neighborhood, and her whole life changes. Everyone at school is talking about it!

Doreen contemplates becoming a full-fledged Super Hero. And thus, Squirrel Girl is born! She saves cats from trees, keeps the sidewalks clean, and dissuades vandalism. All is well until a real-life Super Villain steps out of the shadows and declares Squirrel Girl his archenemy.

Can Doreen balance being a teenager and a Super Hero? Or will she go...NUTS?

I am not familiar with the Marvel universe, but if Squirrel Girl isn’t a recognized superhero, she should be!

Doreen is 14 years old, and was born with a tail. She and her parents have recently moved, and Doreen just wants to make some friends. There are three cliques in her school and none of them really want her to join them: the Skunk Club (juvenile delinquents), Somebodies (the popular girls), and LARPers (Live action role players).

Fortunately, Doreen makes friends with Ana Sofia, who helps her become the superhero she was born to be. She is also accepted by the squirrels in the neighborhood, and Tippy Toe becomes Doreen’s squirrel BFF.

As Doreen faces her nemesis, MM (aka Micro Manager), she must use every ounce of energy and wit to save the day.

This book is so well-written, with fabulous characters and great action. I really can’t tell you all the good things about it. But here are a few:

I loved this book. I literally laughed out loud over and over. It is fun and funny. There is some bathroom humor and fake swearing (like “fuzzmuppets”), but no actual swearing. There is some superhero violence, but it’s not bad. I recommend this to middle grade readers, although younger readers may not get the jokes. It’s also a great book for parents and grandparents to read with their kids—the whole family will laugh. I give it 5 Big Fat STARS!