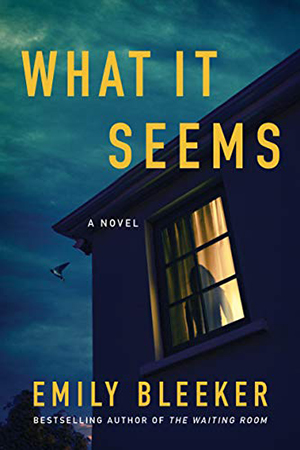 Adopted by her controlling foster mother at the age of eight, twenty-year-old Tara has seen little of the outside world. Lonely, punished for the slightest offense, her only distraction comes from watching the Feely family’s online videos. They’re an affectionate vlogging quintet and an internet sensation. Most important, they are Tara’s mental refuge. Then the opportunity arises for them to be something more. When Tara accepts an internship with the close-knit clan, they’re her escape.

Daring to run away, and defying Mother’s rules, Tara is welcomed into the loving fold. But the more Tara gets to know them, the more she realizes that not everything is as it seems. As secrets slowly surface, the image of the perfect family begins to crack. For Tara, it’s another trap.

To claim a life of her own, she’ll need a new escape plan. Because as the show’s popularity explodes, reaching even more fascinated viewers, Tara can’t shake the feeling that Mother is among their ranks. She’s watching. She’s waiting. She’ll never let her go.

I am a big Emily Bleeker fan. I’ve read all her books and really liked them. I have to admit that this is my least favorite of her books, but I still liked it well enough.

The main character is Tara/Angela—a 20 year old who has been raised in a horrendous, abusive, intolerable situation which just broke my heart. Her mother is awful. (Like angry, psycho, sadistically awful.) Part of me kept thinking this would never happen in real life. Except it does. I know people who have lived similar lives.

As a result of her upbringing, Angela is very socially awkward, has no friends, and doesn’t have the best hygiene habits. She is very smart in many ways (she finds ways to rebel in secret using advanced computer skills) but has very few interpersonal skills (develops a strong emotional attachment to a YouTube family). Again, this seemed a little unbelievable, except that I know people like her.

When Angela escaped her abusive situation and applied for a job with this family, I really cheered for her. She was so brave. I couldn’t figure out at first why the Feelys would hire her since she was so socially inept (and smelled). But then as the story went on, it started to make sense.

As in all of Bleeker’s books, the plot was twisty. Figuring out motivations and who Angela could trust (or shouldn’t trust) was compelling. While Angela made some really dumb decisions, she was also tenacious in her determination to become an independent person. I liked the end well enough, but felt it went a little too fast and wrapped up too neatly.

All in all, I recommend this book with some cautions. It’s not a story for young teens. There is quite a bit of violence at times. If you’re triggered by kidnapping, physical harm, death threats or emotional manipulation, this may not be the story for you. While the issues resolve, it’s not what I’d call redemptive for people who’ve experienced abuse. But it was a good mystery, with unfolding characters and lots of twists—and the title is a red herring, because nothing and no one in this book are what they seem to be at first.

I give it 4 STARS, and recommend it to fans of psychological thrillers, ages 18+. (Also, if this is the first book you’ve read by Emily Bleeker, I recommend you read WRECKAGE or THE WAITING ROOM, which is her at her absolute best.)