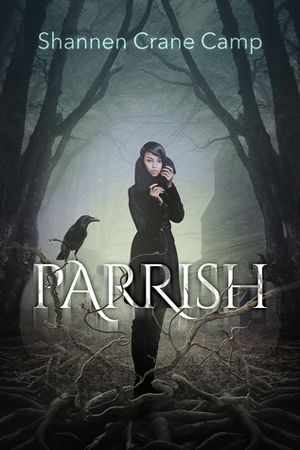 Sadie Smith was absolutely certain of three things: (1) ghosts were indisputably real; (2) she and her three friends were some of the best (though not the most successful) ghost hunters in Oregon; (3) her teammate Jefferson Parrish was always the scariest thing in the room. In a face-off between supernatural beings and Jefferson's Tim Burton-esque vibe there really was no contest.

But ghosts—unsurprisingly—can’t help pay the rent. So when Sadie and her friends are offered an undisclosed sum of money from an anonymous client to find a link between four historical haunted locations, it’s an easy sell.

During their cross-country investigation, Sadie finds herself forgetting about Jefferson’s macabre tendencies and falling for his sweetness, even if his idea of a love letter reads more like a note from a serial killer. And she can’t stop thinking about his annoyingly irresistible deep green eyes.

As Sadie’s feelings get more tangled up with Jefferson, their group puts together the final pieces of a 100 year old mystery—one that will change Sadie’s life forever.

I loved every bit of this story about this ghost-hunting foursome. Parrish, Sadie, Brighton, and Deacon are awesome in their quirky uniqueness. Seriously, these are characters that I loved hanging out with, even if they weren’t doing anything but sitting around shooting the breeze. (Although, they do plenty.)

There’s quite a bit of genre-mixing in this story, which for me just added to the enjoyment. First, this is a supernatural story because GHOSTS! And there are plenty of them. Then you get the Urban Fantasy/Paranormal part because it’s a contemporary setting, and each of the foursome have some unique, almost otherworldly talents, some of which are only hinted at in this book. But it’s clear that they belong together as a team.

Romance? Yes! Just enough to be interesting, but not enough to take over the fantasy/paranormal elements. And mystery—when they get an anonymous letter with a job offer that’s too good to be true, things start to get twisty.

Full Disclosure #1: I read the original Parrish when it was self-published last year. Loved it. Planned to review it then, but… life. Then I heard that it had been picked up by Future House Publishing and decided to wait. I can say that the little tweaky things I might have mentioned about that version have been resolved in this version. (So no need to mention them.)

Full Disclosure #2: I rarely read ghost stories. They freak me out. But I’ve read most of Shannen Crane Camp’s other books—Pwned, the June series, the Sugar Coated series (currently being republished by Future House Press)—and loved them, so I decided to give this a try. And other than a few scenes that made me stop reading it at night (like the one in her hotel bathroom & at the house at the end), it wasn’t too creepy.

Full Disclosure #3: I don’t really “know” Shannen Crane Camp. But I met her at Comic Con one year and went all geeky fan-girl over her, and now I stalk her on social media and tell every one I know that we’re BFFs.

With all that out of the way, let me just say: READ IT! Don’t even hesitate. Trust me.* Just go get it now!

You can enter to win an autographed copy of PARRISH from Future House.

Enter to win a copy through  GoodReads.

Characters: I loved all of them. In their early 20’s, they’re still trying to work out their place in life, relationships, personal identities. All while hunting ghosts. Sadie has a lot of the insecurities of a teenager but she is getting her wings. I found her character to be completely believable.

Sadie’s best friend, Brighton, is a techno genius who is afraid of ghosts, not to mention phobias and allergies galore—but she’s not a wimp.

Deacon is a skeptic who is along for the adventure. (And maybe some romance.)

And Parrish—oh, my gosh! He is brilliant, a tad sociopathic, and just plain weird. (And I totally have a book-boy crush on him.) (P.S. I don’t want to taint your experience, but if you click this link you can see how I totally imagine Jefferson Parrish!)

The interaction and dialog between this group as they try to solve the mystery is funny and clever. They work together well. Well, sort of… maybe I should say, quirkily good enough. I loved it.

Plot? Okay, this is tricky because there are twists and turns, and at times I was wondering if they’re chasing ghosts or a murderer? Or something else entirely. As I was reading, I was trying to figure it out—but then I just gave up and decided to enjoy the ride. And it was a great ride! There is a lot to be revealed in future books, this one doesn’t quite wrap up the mystery and hand it to you with a bow on top. But the big (almost) reveal of the mystery letter and the “person” behind the job was good.

If you like ghosts and mild horror, I recommend this book. I’d be fine with teens reading it. Although labelled as New Adult, there’s not the sex or language that you often find in those books. I can’t wait until the next book comes out to re-visit these four ghost hunters and see what they discover next! I give it a strong 4 1/2 STARS.