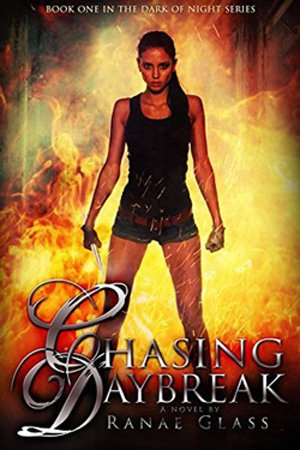 Isabel Stone wanted a normal life. But when the unexpected death of her father leaves her at the helm of the family business, things quickly go from weird to worse. Vampires are on the loose and out of the coffin, and only Isabel can walk the fine line between the world of the living and the world of the undead.

Torn between letting go of her past and embracing her future, Isabel will have to decide who she can trust, and be willing to use all the weapons at her disposal, to get to the bottom of a terrifying string of deaths that lead right to her doorstep—before she becomes the next victim. In a city where nothing is what it seems, ending up the target of a deranged killer might actually be the high point of her week. Because in this town, the things that go bump in the night… just might kill you.

I loved this book! I was immediately hooked into the story and could not put it down! Isobel Stone is a great character—strong and sassy. She is no shrinking violet, and it’s a good thing because life just won’t give her a break. Her father dies and she puts her own dreams aside to take over his private investigating company. She’s left at the altar by her fiancé. Her mother and sisters rely on her for emotional and financial support. And then there are the vampires…

I love urban fantasy/paranormal, and Chasing Daybreak has all the essentials—vampires and werewolves, good guys and bad guys (you can’t always tell which is which), a murder mystery, some romance, and that undefinable something that pulls it all together and makes for one great read.

I really liked the writing style. Characterization was good, although I thought Shane (the ex-fiancé who was turned into a vampire) was kind of a wimp. Xavier could give him some serious competition for Isobel’s heart. It will be interesting to see how this develops. The mother and sisters could also bring in some fun issues in the future.

The dialog was natural and believable. The plot was twisty and not obvious until the very end—and I’m okay with that.  Pacing was fast—the good kind of fast. The violence is typical vampire-story murder, so expect some blood and ick, but the gore is minimal, especially for this genre. It’s marketed as ‘New Adult’ which had me a little worried, but other than  kissing and groping, there’s not much steam. (Maybe a PG rating.)

The only negative for me: there was quite a bit of swearing (enough that it pulled me out of the story) and the f-word was bandied about. That was disappointing.

Book two, Chasing Midnight, comes out next week and I’m looking forward to it. I recommend this book for college age and adults who like urban fantasy. If you liked the Mercy Thompson series by Patricia Briggs (which I do), the Morganville Vampires series by Rachel Caine (which is YA), or The Hollows/Rachel Morgan series by Kim Harrison (which I decided was too sexy for me after the first few books), you’ll probably like this series as well.

Ranae Glass is the pen name for a popular YA author. She uses this name for her NA and adult novels. A southern girl at heart, she loves feeding people, gardening, and sweet tea. She hails from Oklahoma and lives with her family out west where she spins tales of vampires, werewolves, and other things that go bump in the night.