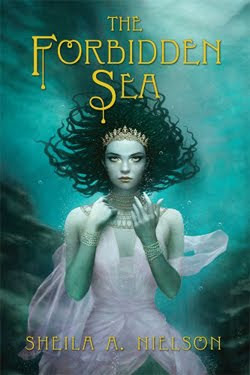 A mermaid haunts Adrianne’s dreams… is she coming to warn her, save her, or drag her down into the depths of the briny sea forever?

When Adrianne comes face-to-face with the mermaid of Windwaithe Island, of whom she has heard terrible stories all her life, she is convinced the mermaid means to keep her younger sister. Adrianne, fierce-willed and courageous, is determined to protect her sister from the mermaid, and her family from starvation. However, the mermaid continues to haunt Adrianne in her dreams and with her song.

Full Disclosure: Sheila and I have been in the same writing critique years for several years. I read this book in its many variations, but was still enthralled with the story when it finally hit bookstore shelves. Despite being good friends, I purchased this book with my own money and was never asked by Sheila to do a review of any kind.

Isn’t that the most amazing cover?! I think it’s absolutely breathtaking. The illustrator did a wonderful job capturing the mermaid much as I imagined her to be.

The story inside is wonderful, too. When her father dies, Adrianne’s mother suffers from what we’d call severe depression. They lose their income, their status and their home. Adrienne is forced to work on the farm and care for her younger sister, while her mother does mending and her Auntie Minna  blames her for their situation. Adrienne also must contend with her own version of “Nellie Oleson” in the form of Cora Lynn, and other town bullies. Denn, her lifetime friend and now the boy she secretly loves, has a crush on Cora Lynn. On top of all that, there’s a mermaid trying to lure her into the sea.

This is a great mermaid story with a twist. The writing is clear and descriptive. You feel like you’re  there experiencing life right along with Adrianne. Your heart breaks for her, but you can’t help but be inspired by her strength and courage.

I recommend this book to girls, ages 12+ and to anyone who enjoys YA fantasy or a good mermaid story.

About Sheila A. Nielson

Sheila A. Nielson writes fantasy and adventure for young adult and middle grade readers. In addition to writing books, Sheila A. Nielson has also worked as a children’s librarian for over fifteen years. She also has a BFA in children’s illustration.

« The Fourth Nephite by Jeffrey S. Savage
I Am Not a Serial Killer by Dan Wells »