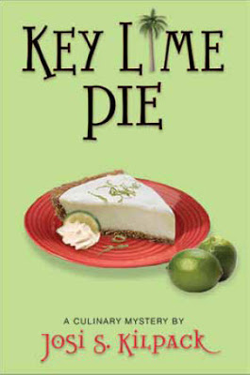 When Sadie Hoffmiller’s new friend, Eric Burton, receives word that his missing daughter’s body may have been found in Florida, he immediately packs his bags, but Sadie is determined to stay home and prove to everyone that she is not a busybody.

But when she senses Eric is hiding something, Sadie is compelled to take action. Before shee knows it, she’s in the heart of Miami, trying to piece together a trail littered with broken relationships, mysterious strangers, and forged documents that might just provide Eric the answers he’s been desperately searching for—or reveal a truth he may not be ready to face.

Sadie must also face a difficult question: Where is her heart leading her? Onward into Eric’s adventurous arms? Or back home to the stable and steady Pete Cunningham? If only love was as easy as following a recipe.

This is book #4 in the Sadie Hoffmiller series—and while you don’t HAVE to read the books in order, I recommend that you do. Because I haven’t reviewed the previous books in the series, here’s a little synopsis:

Lemon Tart #1: Cooking aficionado turned amateur detective Sadie Hoffmiller tries to solve the murder of her beautiful young neighbor, a single mother who was lured from her home while a lemon tart was baking in her oven. At the heart of Sadie’s search is the woman’s missing two year-old child. Whoever took the child must be the murderer, but Sadie is certain that the police are looking at all the wrong suspects including her! 4 1/2 stars.

English Trifle #2: What begins as a holiday trip Sadie and her daughter, Breanna, turns into a bizarre mystery when they discover a dead body in the sitting room of an English manor. Breanna’s boyfriend, Liam, is heir to both the family title and the family estate of Southgate, where everyone seems to have a secret… or two. When the body in the sitting room disappears, Sadie and Breanna are stranded at the estate until the police can clear them to leave. With their departure delayed, they might as well solve the murder. (My least favorite so far.) 4 stars.

Devil’s Food Cake #3: Its been years since author Thom Mortenson has been back to Garrison, Colorado. As part of the committee who invited the bestselling writer to speak at the library fundraising benefit, Sadie Hoffmiller wants everything to be perfect right down to the homemade devils food cake she baked herself. Certainly, murder was not on the menu. Neither was a new romantic interest, Eric, who gives Pete some serious competition. (My favorite so far.) 4 1/2 stars.

In Key Lime Pie (book #4), not only is Sadie involved in a fourth mystery, but she must sort out her feelings for Pete and Eric. Not an easy task.

I loved this books! I loved everything about it. Want to know how much I loved it? I loved it so much that I decided to forgo my Sunday afternoon nap so I could finish it.

The characters are interesting, unique, quirky—especially Sadie. She is so determined not to be a busybody, and yet, that’s one of the traits that makes her so endearing. I love the way her mind works—and her heart.

In addition to being a fun suspense, Key Lime Pie was also satisfying in the relationship department. At the end of Lemon Tart, I firmly wanted Sadie to end up with Pete. But by the end of Devil’s Food Cake, I was really liking Eric. I was in a quandary at the beginning of this one, not knowing for sure who I wanted her to be with. But by the end of the book, I can honestly say, I liked her choice.

The plot has a lion’s share of twists and turns. Several times I thought I had it all figured out, only to have the story spin off into another layer of intrigue and mystery. Key Lime Pie was a completely engrossing and totally fun mystery!

(And for my non-LDS friends, even though this book is published by Deseret Book/Shadow Mountain there is absolutely no mention of religion whatsoever in the book.)