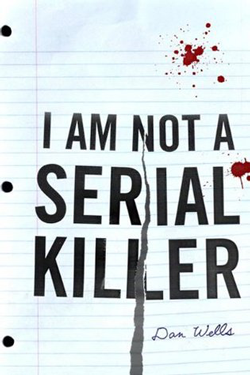 John Wayne Cleaver is dangerous, and he knows it. He’s spent his life doing his best not to live up to his potential.

He’s obsessed with serial killers, but really doesn’t want to become one. So for his own sake, and the safety of those around him, he lives by rigid rules he’s written for himself, practicing normal life as if it were a private religion that could save him from damnation.

Dead bodies are normal to John. He likes them, actually. They don’t demand or expect the empathy he’s unable to offer. Perhaps that’s what gives him the objectivity to recognize that there’s something different about the body the police have just found behind the Wash-n-Dry Laundromat—and to appreciate what that difference means.

Now, for the first time, John has to confront a danger outside himself, a threat he can’t control, a menace to everything and everyone he would love, if only he could.

I Am Not a Serial Killer is Dan Wells’ debut novel—and if it’s any indication, we will see lots more from him. This story is so unusual and bizarre that I know some of you aren’t going to feel the love like I do. But seriously? I loved this book.

First, a couple of notes. This series was released in the UK by Headline Publishing Group (UK imprint of Hachette) before it came to the U.S. I have the UK version because I picked it up at a writers conference (along with the second book of the series) that Dan Wells attended. I don’t think there are any significant differences between the two versions, except for the covers and formatting. (See red UK cover below.)

Second, about that content warning…  There is no sex or drug and alcohol use. But there is violence, demon fighting, and detailed descriptions of gross stuff—like an embalming in the first chapter. (Yes, I was a bit squeamish reading it.) There is also some “light” swearing. That said, I think these books are very appealing to teens, especially boys, and I think the subtle positive messages more than balance out some of the harsher scenes.

Unlikely hero, John Wayne Cleaver (what a name!) IS a sociopath, by classic psychological definitions. However, unlike most sociopaths, but like most teens, he works very, very hard to overcome his darker side and his negative impulses. John realizes he has choices and that it’s not his impulses or thoughts, but his behaviors that define him as a person. I think this is an important message to teens these days; it’s subtle, but it’s there.

This book is very well-written and very descriptive. The storyline and plot points are fast-paced and keep you turning the pages. It was imaginative and unique. Intense and riveting, I recommend this book to teens (14 and older) and anyone who enjoys a light horror story, frightening enough to get your adrenaline moving, but not so hopeless and dark that it leaves you sleeping with the lights on.

« The Forbidden Sea by Sheila A. Nielson
Mr Monster by Dan Wells »