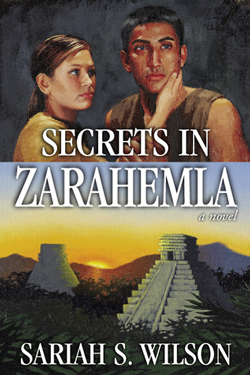 As she hangs upside-down in a hunter's snare, Kiah feels a wave of fear as her captor comes into view. By his looks, as appealing as they are, the tall Lamanite is the mortal enemy of Kiah and her people. She can't hope that her father, Captain Moroni, and his Nephite soldiers will rescue her — the strong-willed young woman has wandered well beyond the safe borders of Zarahemla. However, she is determined to use her warrior training to fight the Lamanite called Jeran until the end, no matter how hopeless the odds.

The land of Zarahemla has long been under serious threat from its enemies. But recently, its worst foes come from within — including Corahan, a man who would stop at nothing to fulfill his desires. One of the things Corahan most wants is Kiah as his wife. Now Kiah and her new unlikely ally must call on all their faith and courage to save Zarahemla in a struggle that will bring either deliverance or death — to both of them.

Journey to 62 BC and discover adventure, intrigue, and romance in a story where evil must be fought against, no matter how high the cost.

Secrets in Zarahemla was a stretch book for me because it’s a romance and “traditional” romance is not my favorite genre.

Okay, here are my issue with romances. I just don’t believe them. I don’t believe people fall in love at first sight. I don’t believe a strong relationship can develop in a matter of days. I don’t believe all the fainting and sighing and does-he-love-me-or-not junk. Since this is the currency of romance, I spend most of my reading time rolling my eyes and making retching noises.

While reading Secrets in Zarahemla, I think I only rolled my eyes once and I don’t remember making a single retching noise. While there was plenty of pounding heartbeats, stolen glances and almost kisses in this book, there was also mystery, suspense and action—enough to distract me from the mushy stuff. It wasn’t a bad read.

Wilson did a good job with her characters—they were believable. I liked Kiah. She is strong and tough with a mind of her own. Nothing wishy-washy about her, no fainting or sighing. I liked Jeran. I believed in his motivations, his actions. I believed their relationship—the way it developed. We spent some time with them before they started with all the lovey-dovey stuff, and they had some substance. I could see why they would be attracted to each other.

I liked the way Wilson’s bad guys, specifically Corahan, changed, the way he made choices that took him farther and farther into the darkness. I also liked the way she gave her supporting characters personality and believable motivation.

Even though the LDS fiction market is so small that there is not always a distinction between YA and adult fiction, I consider this a YA novel. As such, there are a couple of places parents might want to be aware of—there is some violence (there is a war going on, after all) and an attempted rape, but I felt it was handled very discreetly. I’m not one who feels we need to completely shelter our children from the bad things of the world. Forewarned is forearmed. I did not find these passages at all offensive and would be completely comfortable recommending it to mature 12 year olds, and anyone 14+.