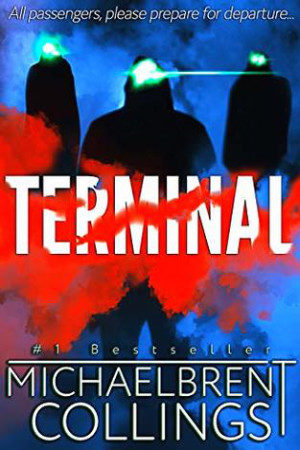 But when a strange, otherworldly fog rolls in, the night changes to nightmare. Because something hides in the fog. Something powerful. Something strange. Something… inhuman. Soon, those in the terminal have been cut off from the rest of the world. No phones, no computers. Just ten strangers in the terminal… and The Other.

1) The people in the terminal must choose a single person from among them. That person will live. The rest will die.

2) Anyone who attempts to leave the terminal before the final vote will die.

3) The final vote… must be unanimous.

A nightmare. And getting worse, because the best way to make a vote unanimous… is to kill the other voters.

Welcome to the Terminal.

A spooky fog, an anonymous tormentor, and the worst of human nature…

If you don’t like horror, then just skip this review. Because this book is a case study in human behavior when under extreme and life-threatening pressure. And it’s not pretty. (Think Lord of the Flies.)

There are 9 people trapped in a bus terminal by a spooky, freaky fog. If that isn’t bad enough, then “The Other” starts messing with their electronics and their minds. They are told that only one person can survive—and they have to decide who it will be or they all will die.

You can totally guess that this is going to bring out the absolute worst in almost everyone. And yet, some of them rise to the challenge and become better than they were—or at least, they try.

Yes, some of the tropes and imagery have been done before, but I still really liked it. The character depth was the best part of the story. Every one of them were unique and developed. I felt like I was right there with them. And a lot of it was heart-breaking. (Of course it was, this is HORROR!)

Just don’t expect a group of survivors leaving the terminal as the fog clears, triumphant. This is not a feel-good story, but it is good horror.

When it comes to revealing the identity of The Other, what they are doing, and why are they doing it—that was the weakest part for me. At first, I was surprised and awed. But then I started thinking and remembered a few things that the reveal does not answer. But maybe that’s the point, right?

There is extensive, descriptive, and bloody violence; moderate swearing; crude humor and references to body parts; and drug and alcohol use. It brought me close to my line of comfort in these areas, but honestly, the writing was good and I couldn’t stop reading.

If you like horror, you’ll probably like this. Parents, if you’re considering it for your teen, I’d suggest you read it first.

As for story, writing style, and character development, I give it 4.5 STARS.