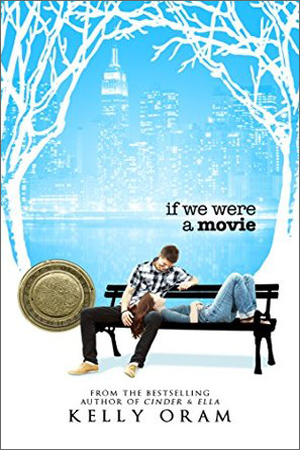 NYU freshman Nate Anderson is a triplet who is desperate to escape his wild and crazy brothers. After they screw things up for him one too many times, Nate flees his housing situation and takes the first available room for rent as far from his brothers as he can get.

Enter his new roommate Jordan—a quirky LA girl who believes that everything in life has already been done in the movies. In this heartfelt tale of love, friendship and family, Nate learns how to deal with his new adult life using Hollywood films as a guide.

Although part of the The Power of the Matchmaker series, a multi-author project featuring the recurring character of Pearl the matchmaker, this book is a STAND-ALONE novel.

Let’s address the whole New Adult/Clean-ish thing first because this is going to be a make or break for some readers. The “New Adult” designation is sort of code for 18-25 year old characters and steamy love scenes. When a New Adult book is marked “clean” it doesn’t always mean no sex or swearing, what you’d typically expect from a “clean” romance. It usually means that relationships are implied, but not descriptive.

And that is the case with this book. The Amazon description gives a mild caution, but I’ve updated it to what I feel is more accurate: Rating is PG-13. Characters are college-age, with mild swearing and innuendo. A sexual relationship is implied, but there is nothing more than kissing in the book.

So while this might not be considered clean by some clean romance readers, it’s very clean compared to current New Adult standards.

I really like Kelly Oram’s writing style. I’ve read a few of her other books and they are quick and easy to read. Not a whole lot of depth (this isn’t intended as literary fiction), but interesting characters and fun plots. In some, like this one, she touches on a few real-life issues, but doesn’t beat us over the head with them. Her books make for a nice Saturday afternoon read.

In If We Were a Movie, I really liked the movie references as chapter titles. I thought it was cute and clever. It was fun to draw comparisons with the movies I recognized, and for those I didn’t know, I was still able to get the point.

While the characters sound more like 16-year-olds and the plot was more typically what you’d see in high school, that was a minor thing for me. I still remember my first year in college and it could have happened.

I liked that Nate, the main character, grows a backbone and starts making decisions based on his own needs, rather than following along. I would have liked to have seen Jordan grow a little more, but the fact that her character arc was much less was okay. When you write so closely in first person, that’s the character we’re really looking to see change.

Although I felt some of the characters were over the top—Nate’s brothers, his girlfriend, Jordan’s gay best friend*—they made for a fun read.

*While I don’t have a problem with gay characters, the stereotyped, currently obligatory gay best-friend is bordering on cliché.

In summary, I wouldn’t give this to my teen to read unless I planned to have a discussion with them about it afterward. But if you like lighter contemporary romance, with funny characters and crazy situations, this one will fit the bill. I give it 4 STARS.

Open only to those who can legally enter. Winning Entry will be verified prior to prize being awarded. No purchase necessary. You must be 18 or older to enter or have your parent enter for you. The winner will be chosen by rafflecopter and announced here as well as emailed and will have 48 hours to respond or a new winner will be chosen. This giveaway is in no way associated with Facebook, Twitter, Rafflecopter or any other entity unless otherwise specified. The number of eligible entries received determines the odds of winning. Giveaway was organized by Kathy from I Am A Reader and sponsored by the author. VOID WHERE PROHIBITED BY LAW.

« The Rules in Rome by A.L. Sowards
Solstice by Jane Redd »