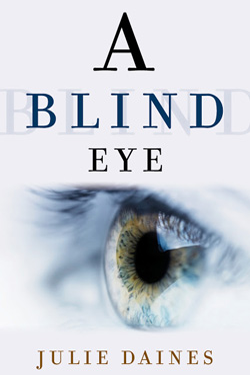 Some people are born blind. For some, tragedy leaves them blind. And then there are those who simply refuse to see. This is a story about all three.

Seventeen-year-old Christian Morris decides the only way to save himself from his father's neglect is to run away from home. On his way out of town, he finds a stowaway hiding in his car—Scarlett, who has been kidnapped from London. Blind since birth, Scarlett has developed a sixth sense: she dreams about someone’s death before it happens. And now, she has dreamed about her own.

Christian’s attempt to leave home turns into a race to save Scarlett from death by scientific experimentation. His growing relationship with the girl helps him to look past his own blindness and confront the truth about his father. But first, he must find the kidnappers before they can get to Scarlett.

I’m always just a little apprehensive when someone asks me to do a book review. If it’s an author I already like, no problem. But otherwise, it makes my tummy just a little uneasy when I open the book and start into those first few pages. I’m so afraid of being disappointed.

Especially when the offer of review started as, “My friend wrote a book and I loved it…” Well, of course you did. They’re your friend; you’re going to like their stuff. You’ll get the inside jokes. I won’t.

And especially when it’s a debut book by a new author—because how do I say, “This baby was kind of ugly, but I’m sure your next one will be much cuter,” in a tactful way that won’t crush their writing dreams forever.

And most especially when the publisher is small and in my opinion, often lets their authors get away with too much info dumping.

Why am I telling you this?

Because the rarest of all rarieties happened. Despite my initial trepidation and the fact that all of the above applied, in my opinion, Julie Daines knocked it out of the park on the first swing with her debut novel, A Blind Eye.

Plot: A Young Adult suspense with just a hint of some psychic activity.

The pacing was just right. Lots of edge of your seat tension, but moments of quiet and humor too. I really liked the clever chapter titles which added some breathing room.

Unlike too many YA adventure stories, Daines has plausibility built into every action Christian takes. When he needs to go into a situation that will place his life in jeopardy, there is a good reason for it. When he suddenly turns to his father for help, there’s a good reason why he does what he does that, too. When he needs to be caught without his cell phone, there’s a believable reason why he doesn’t have it with him. Not once did I think, “Gee, that main character was kind of stupid. He only did that because the author needed him to do it to advance the plot.”

This is an action/suspense/murder story. People die. It’s sad. The characters respond. There was enough tension and enough plot twists to keep an adult involved, but it wasn’t so descriptive that it would overwhelm a teen reader. I’d say age 14 and up.

Characters: Christian was 100% believable. He’s basically a good guy dealing with an unbearable situation with his dad. He’s hurting. He doesn’t accept his father’s first attempts at reconciliation. He doesn’t believe it’s real. He doesn’t trust him. And it doesn’t end all huggy-kissy, we’re best friends now. He has a lot of work ahead.

Scarlett was awesome. I have no idea how I’d react if I were blind. I’d probably curl up in a corner and be too afraid to leave it. But not her. I loved her sense of humor, the determined way she refused to be dependent, and her punk look.

Christian’s dad was believable too. As an adult, I could see what Christian couldn’t. While he didn’t turn into father of the year by the end of the book, all along I could see hints that he wasn’t quite the uninvolved and hateful father that Christian believed him to be.

The interconnecting of the bad guys—things that didn’t make sense at first, totally make sense once you understand all the connections. I love it when that happens!

Writing: Very, very good. There were only two things that pulled me out of the story a little bit. (And by “little bit” I mean nano-seconds. Long enough to notice but then I was right back into it.)

One was the fact that Scarlett, who is blind, describes her precognitive dreams using what I would call “visual” terms. She gives us an answer for this, and since I have no interaction with someone who is blind, I am willing to accept it on faith and let it go.

The other times were when suddenly Christian mentions “the bishop.” Oh? Is this an LDS story? Then later, he mentions “early-morning seminary.” I guess it is. It never really says. I’m smart, I can adjust. But non-LDS readers would be confused.

And that’s too bad, because I would definitely recommend A Blind Eye to all readers who enjoy this genre, regardless of their religion or lack of it. Other than some references to the benefits of forgiving others and Christian’s statment that he has boundaries, there are no LDS declarations of faith, no conversions, no preaching in this story. It could be anyone, any religion. And to me, that gives this book a very wide appeal.

To sum up: This book is fantastic! If you’ve ever felt I steered you right in a book review before, trust me on this one. Read it! I give it 4 1/2 stars and I’ve already nominated it for a Whitney Award. I hope the publisher can get it enough attention that it’s noticed on a national level.

Recommended to  teen readers, 14 and up, who like contemporary mystery/suspense/action and to adults who like a good suspense without the gore.

3 responses to “A Blind Eye by Julie Daines”