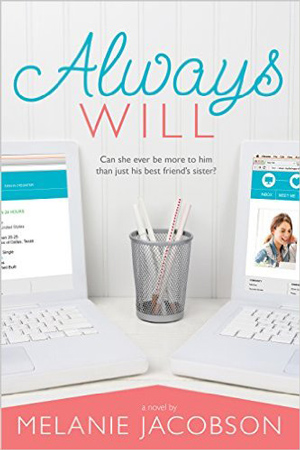 Handsome twenty-eight-year-old Will Hallerman has finally had enough of the dating world. He’s ready to find a wife and settle down. This announcement is catastrophic in Hannah Becker’s world. After knowing Will her entire life and adoring him from afar since junior high school, she realizes her chance at love with him is in grave danger. Hannah’s problem? To Will, she will never be more than his best friend’s little sister.

Determined to open his eyes to her charms, Hannah sets out to sabotage Will’s wife hunt by placing nightmare dates in his path and taking his search on a wild goose chase. Her plan is risky, but she’s willing to take a chance to catch the eye of her soul mate.

Despite her crazy schemes, nothing seems to be working. Hannah can’t help but wonder if it’s time to set aside this childhood crush to move on and settle down herself. She’s ready for a fresh start with a great guy. If only Will weren’t suddenly changing the rules of the game… And how can Hannah move on when Will just won’t let her forget?

ALWAYS WILL was a fun, fast read for me. It’s not my favorite by Melanie Jacobson, but it’s in the top 3 (#1 Painting Kisses, #2 The List).

I love fun and quirky characters. Hannah, Will, and Hannah’s best friend, Sophie, were great. So were a few of the guys Hannah met online. I found myself laughing out loud (literally) at some of their teasing interchanges. Funny and clever dialog all over the place!

For example, this conversation between Hannah and Will:

Will: “What is that? It smells good?”

Hannah: “Eye of newt. It’s the next big thing after Paleo and South Beach.”

And Will is great with the one-liners:

“If I trip you in the next ten seconds, I swear it was a total accident.”

And speaking of his date with one of the girls Hannah picked for him:

“I feel like I’m trapped in an artsy short film about the futility of existence.”

I’m going to have to remember that one for future use!

Hannah sometimes acted like a teenager instead of an adult, especially when it came to Will. We understand why she’s like that when Sophie reminds her that her emotions stalled out at 14 years old. But still, Hannah is a very bright and successful computer coder, so it was a little hard to believe (although at times, incredibly funny).

Will, at times, was totally clueless and displayed the emotional range of a thumb tack. I wanted to just smack him. But at other times (when Hannah has a migraine), he showed incredible sweetness and depth.

Overall, I really enjoyed the read. It reminded me a little of the Tom Hanks and Meg Ryan rom coms. It wasn’t so much the journey they took, as the fun they had along the way.

A solid 4 stars; recommended to fans of sweet romantic comedy.

[bctt tweet=”How far would you go to catch your soul mate? ALWAYS WILL by Melanie Jacobson. 4 stars. @Writestuff_Mel”]