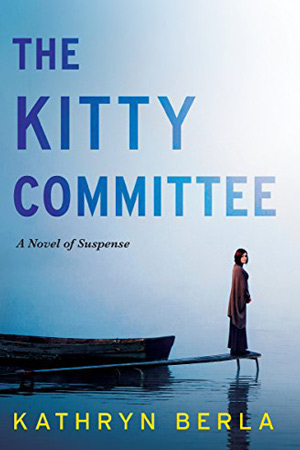 Every year, it comes. And every year, it reminds Grace that someone knows her deepest secret—the secret whose silence has tormented Grace over the years. That secret began with an innocent gang of teenage friends who called themselves The Kitty Committee.

The Kitty Committee of Grace’s youth was ostensibly a group of friendship and support. But the friends fell victim to the ringleader’s manipulative personality and recklessness, which set the girls on a course of vigilante justice, culminating in an act that will forever change their lives, an act that becomes their shared secret.

Grace’s silence and guilt has led to over twenty years of disappointing relationships, an inability to commit, and a crisis of morality. And no matter how much Grace has suffered and lost, still it comes every year. The reminder that someone out there wants The Kitty Committee to suffer—someone who won’t forget and won’t forgive.

The Kitty Committee is a thrilling story of guilt, relationships, sin and atonement for a decades-old secret shared between a circle of once-inseparable friends.

Amazon needs to add a new genre category: dark and twisty. I generally like twisty. I love it when I can’t figure things out until the very end. Dark, I have a love/hate relationship, depending on what exactly makes it dark.

Told in first person, Grace goes back and forth between memories of “something” that happened during her high school years to the results of that event that follow her to college and beyond. Sometimes when a story does that, it becomes fragmented and confusing. But this was well-written and as long as you don’t try to match the two stories too soon, it is great. Just enjoy the ride as the stories slowly merge together.

We don’t find out what the “event” was until the very end, but it all makes sense when it’s revealed. I love when it comes together. The Kitty Committee is definitely a psychological thriller, and I like those. I really like the themes of what happens with bullying, how secrets change you, and eventually some redemption through truth.

Honestly, I have mixed feelings about this book. First, the good stuff.

I loved the writing style and voice. Sometimes writers mix up the teen voice and the adult voice in a book like this, but this book stayed on track. It was wonderful. The descriptions were brilliant and unique, the characters were absolutely believable, and the plot kept me intrigued. (Like read until 4:00 a.m. intrigued.) I can’t say anything against the writing competency.

But we each have a personal line—things we’re okay with and things that make us flinch uncomfortably. I didn’t like the language. There’s a lot of swearing (including the f-bomb). There are also some sexual references and details that normally would make me stop reading. But I kept reading because the story was so intriguing, and poor Grace was so messed up, and I had to know what happened and how it ended.

If you like books that explore mean and twisty people—and you don’t mind the language or sexy stuff—this is a well-written story. Even though there are huge portions of the book based on the teenage girls in the Kitty Committee, I don’t recommend this as a book for teenagers. For writing and intensity, I give The Kitty Committee a full 5 stars. For the language and other stuff, I give it a 3. So I’m averaging it out at 4 STARS.

Kathryn Berla writes in a variety of genres and for all ages. She has been an avid movie buff since childhood and often sees the movie in her head before she writes the book. Kathryn lives in the San Francisco Bay Area.