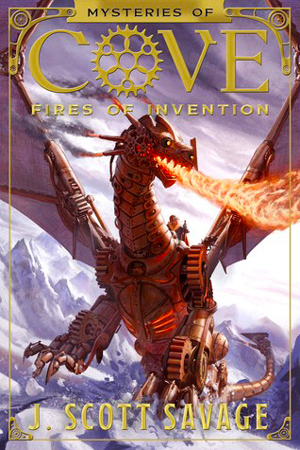 Trenton Colman is a creative thirteen-year-old boy with a knack for all things mechanical. But his talents are viewed with suspicion in Cove, a steam-powered city built inside a mountain. In Cove, creativity is a crime and invention is a curse word.

Kallista Babbage is a repair technician and daughter of the notorious Leo Babbage, whose father died in an explosion an event the leaders of Cove point to as an example of the danger of creativity.

Working together, Trenton and Kallista learn that Leo Babbage was developing a secret project before he perished. Following clues he left behind, they begin to assemble a strange machine that is unlikely anything they ve ever seen before. They soon discover that what they are building may threaten every truth their city is founded on and quite possibly their very lives.

I was lucky enough to go to the release party for Mysteries of Cove: Fires of Invention. I took three of my grandsons (ages 8, 7 and 5). 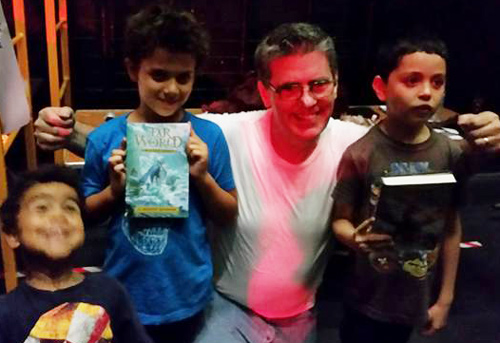 We got to go backstage to meet Mr. Savage. There were several other authors there too, most notably Brandon Mull (the grands love Fablehaven and The Candy Shop War) and James Dashner (they didn’t know who he was but were very impressed that his books have been made into movies).

We had a wonderful time! 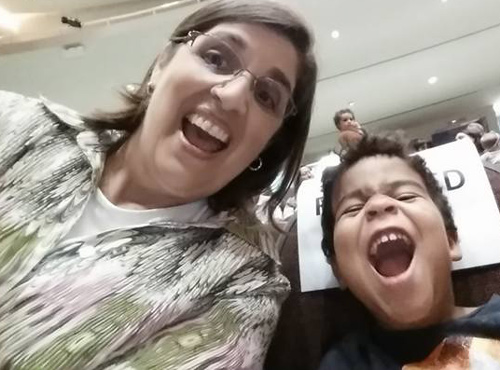 There was a stage show, where Mr. Savage appeared in his pajamas. The five year old loved that!

Each of the boys picked a book. 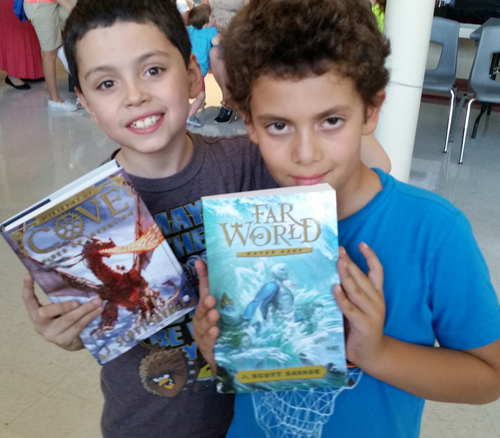 I’ve read every book written by J. Scott Savage. He’s one of my favorite authors. His books are clever and funny, and they end on a positive note. They promote good values—like integrity, honesty, courage, and hard work—without being preachy. Fires of Invention is no different. In this book, it’s creativity and persistence that save the day.

I loved the characters of 13-year-old Trenton and Kallista. They couldn’t be more opposite. Although creativity and invention are forbidden, Trenton likes to “improve” things. This is a struggle for him because he wants to be a good citizen and to please his mother.  Kallista, on the other hand, is the daughter of an inventor. She is fierce, and prickly, and determined to solve the puzzle her father left her. Their friendship gets off to a rocky start, but eventually they learn to trust each other.

The other characters in the book are pretty solid. It’s difficult to understand the motivation of some of the adults at first, but as the book goes on you see what makes them the way they are.

The story moves on at a good pace, balancing the fast action required to avoid detection while Trenton and Kallista solve the riddle, with the discovery of the secrets of their city.

Fires of Invention is the first book in a new series, set in a steampunk world. The main story arc is concluded in a satisfying way, while leaving enough questions in the reader’s mind to look forward to the second book.

I recommend this book to anyone who enjoys upper Middle Grade fantasy stories, with a steampunk feel. Obviously, I think it’s fine for younger readers, both boys and girls, as long as they have strong reading skills and a good vocabulary. I give it 4 1/2 STARS.