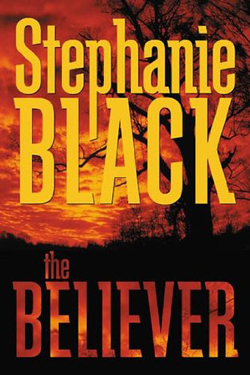 There is a place where the threat of foreign terrorism is nonexistent, where there are no arguments about religion, and no battles over politics. Welcome to New America—a place where reading the wrong book can cost you your life!

Ian Roshek finally believes in something. The young history professor has studied a contraband copy of the Book of Mormon—and he knows what it says is true. But now his newfound convictions will be put to the test as he struggles to listen to the still, small voice, while society screams in his ear.

Ian’s sister Jill and her influential boyfriend only see Ian as a man with religious delusions--a man who needs help. And though her facade of brutality hides it, police interrogator Alisa Kent feels a trace of compassion toward this flawed, but courageous man who stays true to his faith—despite the fact that it’s contrary to both logic and public opinion. If only for selfish reasons, she wants to know more. But soon Ian’s choices will ignite a chain of events that he, and those around him, cannot escape.

In honor of the fact that my copy of The Witnesses by Stephanie Black (sequel to The Believer) is IN THE MAIL on it’s way to me, I’ve decided to repost my review of The Believer. I originally read and reviewed The Believer in 2006. It was Stephanie’s very first book. 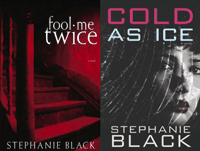 Since then, Stephanie has written five mystery suspense novels. Fool Me Twice is my all-time favorite but I’ve loved every one of them.

(So has everyone else. Her books won a Whitney Award four years in a row!)

I also stalk Stephanie at public events and *rubs fingernails on lapel* we are close personal friends on Facebook.

And the stalking has paid off! I’m mentioned in the acknowledgments for Cold As Ice, set in a bookstore.

But I digress. The Believer has been re-released and is available in ebook format on Amazon now. And here is my original review:

I just finished reading Stephanie Black’s book, The Believer, an LDS futuristic fiction. I hesitated to read it because I have not been overly impressed with LDS fiction in the past. In fact, I used to do book reviews for a local paper 20 years ago. They wouldn’t print my reviews of LDS fiction because I had a bad habit of pointing out plot holes, stuffy dialogue, and trite, sappy endings.

But I was sick last week and bored out of my mind, so I decided to give The Believer a chance—and I am so glad I did! Futuristic fiction, science fiction, fantasy—these are my guilty pleasures. While it’s getting harder to find G or even PG stories in these genres, I still hesitated to try an LDS version. It would be like a Belgium chocolate connoisseur biting into a Hershey bar.

The Believer is set in New America, a country founded by violent separatists. Big Brother is alive and well in New America, where possession of religious pamphlets can land you in jail for years and people are blacklisted for speaking their mind.

Ian Roshek is a history professor who reads a contraband copy of the Book of Mormon and believes it. As he tries to live by its teachings, Ian comes slap up against the very worst of his society—secret combinations, terrorism, corrupt government, and mob mentality.

I liked the plot. There were plenty of twists and turns. I knew what was coming most of the time, but not so far ahead that it bothered me. And I have to say, I’m unusually good at guessing plots. My family often gets perturbed with me for telling them the plot twists and endings five minutes into a TV show or movie.

I liked the characters. They were believable. The ‘good guys’ weren’t lily white and while several of the ‘bad guys’ were just plain evil, others were simply weak and misled. I found myself wondering if I would have the courage to make the same decisions Ian made.

Dialog was natural, not stiff. Character voices were individualized. Emotions and reactions were real. Cause and effect events flowed naturally from one to another, not manufactured for effect. I especially liked the way Stephanie wrote of Ian’s religious beliefs and even quoted scriptures without beating the reader with a conversion stick or baptizing all her characters.

There were a couple of little glitchy places in the book, where I thought, “No, that doesn’t work…” but I enjoyed the book so much that now I can’t remember what they were.

I whole-heartedly recommend The Believer for anyone who likes futuristic fiction. This book is appropriate for teens as well as adults.

And Stephanie, if you’re not at your computer writing the sequel right now, get there fast! I can’t wait to read what happens next. 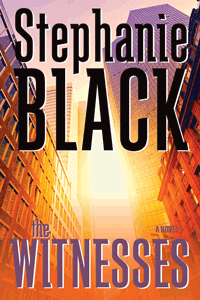 [As an update to my earlier review, let me just say that I’ve revised my opinion of LDS fiction and LDS writers in general. Like any segment of writers, there are good ones and bad ones. I’ve become a whole-hearted supporter of the good ones—and Stephanie is very much one of the good ones. I also spotlight all new LDS fiction releases over on NewLDSFiction.com]

I’ve waited a long time for the The Witnesses to come out—a fact that I place solely upon the shoulders of the publishers, not on Stephanie Black’s writing. But, YAY! It’s finally here! And I can’t wait to read it! Review forthcoming.

*Disclaimer: I was not friends with Stephanie Black when I originally read and reviewed  The Believer. Our first interaction was when she read my review of her book. I checked the book out from the library, but liked it so much that I bought two copies—one to keep and one to lend.