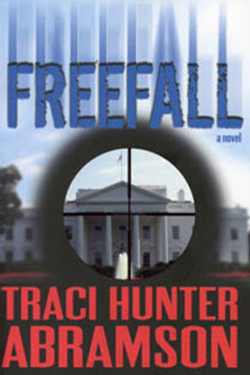 Lieutenant Brent Miller arrived in the Middle East with one objective—get seven hostages out of a hostile country. The plan almost worked. But now he has been left behind—with one of the hostages. It's up to Brent to get Amy Whitmore, a US Senator's daughter, across miles of desert to safety.

What he doesn't know is that to survive, he needs her as much as she needs him.

Freefall is the first book in the Saint Squad series. The Saint Squad is a Navy SEAL team where most of the members belong to the LDS (Mormon) church. Not all of the team members are LDS but they are all good guys. Each book in this series focuses on a different member of the team and a suspenseful mission.

And there’s usually a romantic adventure, as well.

I bought this one when it first came out but it sat in my To Read pile for awhile, patiently waiting its turn. Once I started reading, however, it was less than patient. Fast-paced and full of suspense, this one kep me up late reading. I didn’t want to put it down.

There were a few places where I felt it was a little slow, too much backstory where the action stalled out awhile. But over all, a good read. There was some LDS content—it wasn’t preachy and I don’t think it interfered with the plot. In my opinion, this was a good mix of suspense (80%) and romance (20%).

« Isabelle Webb: Legend of the Jewel by N.C. Allen
The Book Thief by Markus Zusak »