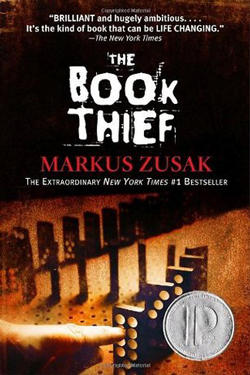 It's just a small story really, about, among other things, a girl, some words, an accordionist, some fanatical Germans, a Jewish fist-fighter, and quite a lot of thievery.

Set during World War II in Germany, Markus Zusak's groundbreaking new novel is the story of Liesel Meminger, a foster girl living outside of Munich. Liesel scratches out a meager existence for herself by stealing when she encounters something she can't resist: books. With the help of her accordion-playing foster father, she learns to read and shares her stolen books with her neighbors during bombing raids - as well as with the Jewish man hidden in her basement before he is marched to Dachau.

This is an unforgettable story about the ability of books to feed the soul.

I do believe this book may make my all-time favorite list.

I was so captivated by this story. The idea of having death as the narrator was intriguing. The characterizations were amazing. Every member of this small community was well-drawn and memorable.

I instantly fell in love with Liesel and her love for books. Her life was so hard, and yet she discovered beauty in the people and things around her. She grew into a young woman of strength and courage. One of my favorite scenes is when she is telling stories in the bomb shelter to help calm her friends and neighbors.

Her foster father was gentle and inspiring. I came to admire her gruff foster mother. The Jewish refugee was tender and kind. I wanted them all to go on forever, but this is a novel about the cruelty and horror of World War II.

This is a thoughtful book, and like many of its kind, it does not have a happy ending for most of the characters. But I loved it. It’s poetic, captivating and inspiring.

I recommend it to everyone, ages 12 and up.

« Freefall by Traci Hunter Abramson
This Just In by Kerry Blair »