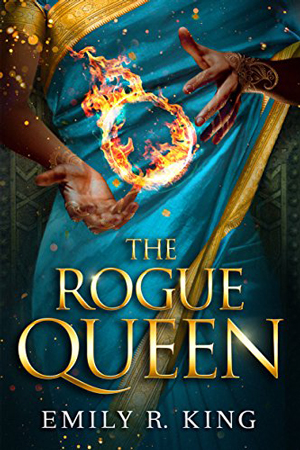 Despite the odds, Kalinda has survived it all: Marriage to a tyrant. Tournaments to the death. The forbidden power to rule fire. The icy touch of a demon.

That same demon now disguises itself as Rajah Tarek, Kalinda’s late husband and a man who has never stopped haunting her. Upon taking control of the palace and the army, the demon brands Kalinda and her companions as traitors to the empire. They flee across the sea, seeking haven in the Southern Isles.

In Lestari, Kalinda’s powers are not condemned, as they are in her land. Now free to use them to protect those she loves, Kalinda soon realizes that the demon has tainted her with a cold poison, rendering her fire uncontrollable. But the lack of control may be just what she needs to send the demon back to the darkest depths of the Void.

To take back the empire, Kalinda will ally with those she distrusts—and risk losing those most loyal to her—to defeat the demon and bring peace to a divided nation.

This is book three in a series, and unfortunately, I have not reviewed the first two books. But here is a quick summary of the first two. If you don’t care about this, skip down to the section titled “Great Characters, Great Plot!”

The Hundredth Queen (#1): As an orphan ward of the Sisterhood in the ancient Tarachand Empire, eighteen-year-old Kalinda is destined for nothing more than a life of seclusion and prayer. Plagued by fevers, she’s an unlikely candidate for even a servant’s position, let alone a courtesan or wife. Her sole dream is to continue living in peace in the Sisterhood’s mountain temple.

But a visit from the tyrant Rajah Tarek disrupts Kalinda’s life. Within hours, she is ripped from the comfort of her home, set on a desert trek, and ordered to fight for her place among the rajah’s ninety-nine wives and numerous courtesans. Her only solace comes in the company of her guard, the stoic but kind Captain Deven Naik.

Faced with the danger of a tournament to the death—and her growing affection for Deven—Kalinda has only one hope for escape, and it lies in an arcane, forbidden power buried within her.

Short Review: I got book 1, The Hundredth Queen, through the Kindle 1st program, not knowing anything about the book or the author. I absolutely loved it, 5 STARS. I thought the characters were compelling, the plot captivating, and the magic system interesting. I immediately pre-ordered book 2.

The Fire Queen (#2): Though the tyrant rajah she was forced to marry is dead, Kalinda’s troubles are far from over. A warlord has invaded the imperial city, and now she’s in exile. But she isn’t alone. Kalinda has the allegiance of Captain Deven Naik, her guard and beloved, imprisoned for treason and stripped of command. With the empire at war, their best hope is to find Prince Ashwin, the rajah’s son, who has promised Deven’s freedom on one condition: that Kalinda will fight and defeat three formidable opponents.

But as Kalinda’s tournament strengths are once again challenged, so too is her relationship with Deven. While Deven fears her powers, Ashwin reveres them—as well as the courageous woman who wields them. Kalinda comes to regard Ashwin as the only man who can repair a warring world and finds herself torn between her allegiance to Deven and a newly found respect for the young prince.

With both the responsibility to protect her people and the fate of those she loves weighing heavily upon her, Kalinda is forced again to compete. She must test the limits of her fire powers and her hard-won wisdom. But will that be enough to unite the empire without sacrificing all she holds dear?

Short Review: You know how middle books in many series are mostly connectors between book 1 and book 3, but don’t have a full plot on their own. Not this one! I also loved this book. Kalinda is learning to understand and control her magic, and that’s not always pretty. Again, I couldn’t put the book down. The only negative was a bit of disconnection when jumping from one POV to another, but not enough to keep me from recommending it. 4 1/2 STARS.

Book 3: The Story Continues with Great Characters and Great Plot!

I love Kalinda. She is a strong woman and committed to her country. She’s willing to do whatever it takes to free her people. At the same time, she’s a young woman—vulnerable and unsure. Just the kind of character I like to read. During the course of the story, Kalinda must continue to be the force that holds her country together, find support from other countries, fight a demon disguised as her dead husband, Rajah Tarek, and protect her friends and loved ones—all while trying to determine the correct course and who she can trust.

Kalinda is also caught up in a love triangle of sorts—she’s clear that she loves Deven, but to save her kingdom, she might need to marry Prince Ashwin, the Raja’s son. So who does she follow—her heart or her duty to her country?

The supporting characters are great. Both Deven and Prince Ashwin have strengths and weaknesses that make them very real. Some of the women who were once Kalinda’s competitors become her allies, and their motivations and loyalties are revealed.

There is a lot of travel, political intrigue, and plot turns throughout. We see much more of the political system and the Bhuta magic system. (I took a test and apparently I’m a Burner.) The story is fast-paced and kept me reading long hours into the night because I couldn’t put it down.

There is a story within the story early in the book, and I thought it was kind of weird that so much time was spent with it. If you feel that way too, just keep reading. There’s a reason.

Note: When I finished the book, I was in a panic because I thought this was a 3-book series. Oh, no! It just can’t end this way!!! It doesn’t. THE WARRIOR QUEEN is already up for pre-order on Amazon. It will be out August 14, 2018.

There is significant violence in this book (and the other two). It is a story of people at war. While I would be okay with older teens reading this, parents might want to read it first. There’s some kissing and sensuality, and mild language. I give this book 4 1/2 STARS.

Emily R. King is a reader of everything and a writer of fantasy. Born in Canada and raised in the USA, she has perfected the use of “eh” and “y’all” and uses both interchangeably. Shark advocate, consumer of gummy bears, and islander at heart, Emily’s greatest interests are her four children. She’s a member of the Society of Children’s Book Writers and Illustrators and an active participant in her local writers’ community. She lives in Northern Utah with her family and their cantankerous cat.