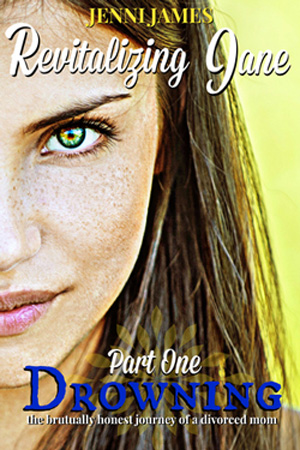 It’s only been a year since her divorce, so why would Jane Adamson do something as stupid as attempt to date again? Wasn’t her marriage scarring enough? The answer was simple—her kids. They worried about her and wanted to see her happy again.

As a mom of five, it was too easy to hide herself away and focus just on her kids. Who needs men, anyway?

Join Jane in part one of a six-part journey of self-discovery, conquering the past, understanding love, and most importantly … healing, as she finds the woman she once was.

Drowning  is the first of six novellas in the Revitalizing Jane series by Jenni James. Known for her Young Adult Faerie Tale Collection and her Jane Austen Diaries, this is a new genre for James.

Drowning is most definitely for adult readers as it deals with the sensitive subject of marital abuse. We meet Jane more than a year after her divorce. Her children want her to date again and she reluctantly agrees. As the book proceeds, hints are dropped here and there letting us know this was not a “normal” divorce. Jane and her children fled their home in fear for their lives.

Jane’s preparation for her first date after divorce is interspersed with flashbacks to her previous marriage. I really liked this approach because the abuse and the fear was hard to read. It was nice to have a break from that. While not graphic nor sensationalized, abuse is traumatic to those who’ve been though it. That is why the publisher has decided to treat this book as a serialization, with new installments coming out every six months.

To be perfectly honest, I didn’t expect this level of writing from James. I’ve read a few of her faerie tales and most of her Jane Austen series, and they are light and cutesy romances—quick reads, mostly for fun. This is not that type of writing. Instead, what we get is characters with depth of emotion and motivation. Not that there aren’t lighthearted and fun scenes in the book. There are. But this is a serious issue and James gives it the respect and depth it deserves. I know many women who’ve lived Jane’s story, to one degree or another. Jane’s emotions ring very true and genuine. I was impressed—and I will be reading the future installments.

I recommend Drowning to readers who prefer a more serious issue-driven novel and to anyone who wants to understand the roller coaster of marital abuse. If you’ve lived this, be cautious if you’re easily triggered, but I think you will be inspired and helped by the over-arching message of courage, hope and healing.

Jenni James is the bestselling author of several Young Adult series, including The Jane Austen Diaries and The Jenni James Faerie Tale Collection. She also writes for middle grade and adult readers.

« Review: And Something Blue by Paige Timothy
Review + Giveaway: Gone for a Soldier by Marsha Ward »